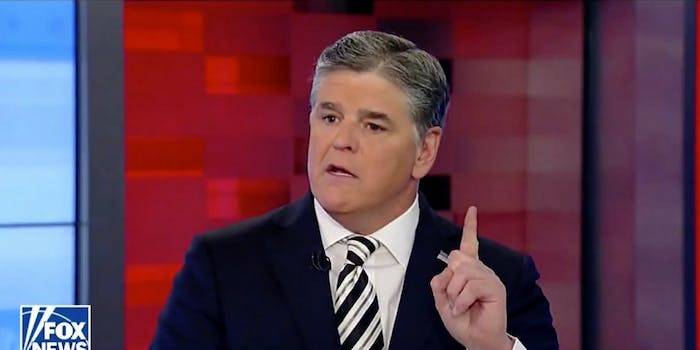 Sean Hannity doesn't know if the allegations are true, but called them 'beyond reprehensible' if they are.

On Thursday, the Washington Post reported that one woman said Roy Moore, the Republican nominee in Alabama for U.S. Senate, sexually assaulted her in 1979, when she was 14, and that three others say they had consensual relationships with Moore when they were between the ages of 16 and 18 and he was in his early 30s.

Amid Republicans parsing the validity and morality of these allegations was Fox News host Sean Hannity, who, during his Nov. 9 airing of his radio show the Sean Hannity Show, appeared to have called Moore’s accused actions with a 14-year-old consensual. In Alabama, the age of consent, now and at the time of the allegations, is 16. Hannity has since apologized for misspeaking.

On his radio show, Hannity had called the reports “he said, she [said],” and said people come forward with false allegations or come forward for “political reasons.” Then, during a moment of crosstalk with Premiere Radio Networks Executive Producer Lynda McLaughlin, Hannity appeared to call an “encounter with a 14-year-old,” consensual. Media Matters for America published the show’s audio and transcript:

HANNITY: How do you possibly tell, know the truth, except — okay, so, the two other girls were older in this case. He was apparently, like, 32, and he dated — one girl was 18, one girl was 17, they never said he did — there was no sexual — there was kissing involved, and then they’re saying this one encounter with a 14 year old —

MCLAUGHLIN: And it was consensual —

HANNITY: And consensual, that’s true. And there’s, you know — I just — I don’t know how you find out the truth.

The sound bite drew anger on social media from critics who felt Hannity was describing Moore’s behavior with an underage woman as consensual. CNN’s Jake Tapper criticized Hannity as well, the two news anchors getting into a Twitter scuffle after Hannity accused him of taking his comments out of context. The pair eventually deleted their tweets after Tapper tweeted that “the crosstalk” of Hannity’s conversation with McLaughlin “was confusing” and there was “no reason to believe the worst.” Those tweets have been preserved on Mediaite.

Later Thursday, while discussing the allegations on Fox News, Hannity opened the conversation on Moore by addressing his earlier comments (which can be watched at 15:26 in the video below). Hannity asked his panel if, during his two hours on the radio, he had “sounded different” than when he had just called the allegations, if true, “beyond reprehensible, beyond disgusting, and beyond shameful.” Geraldo Rivera said Hannity did not, but said he believed Hannity “misspoke in one sentence.”

Hannity went on to say that he thought McLaughlin was “talking about the 18-year-old and the 17-year-old” when had called the encounters consensual on the radio.

“Regardless, we’ll clear it up right now. You cannot consent if you’re underage, it is legally impossible. You know that,” Rivera said.

Rivera then went on to say that the “reaction” to Hannity’s misspeaking was “symptomatic” of a larger problem of believing what they want to believe. He used people not believing the allegations against Bill Clinton, but wanting to believe the news that broke yesterday about Trump being offered women in Russia as an example. (Trump, for the record, has been accused by multiple women of committing sexual assault.)

In a statement obtained by Mediaite, Hannity further apologized for misspeaking and for not being “totally clear” on his radio show:

“As I said on TV tonight, I apologize when I misspoke and was not totally clear earlier today. It’s really sad when the lazy media in this country cuts and pastes a deceptive and out of context comment by a Soros funded radical left-wing group that has purposefully taken me out of context for years. My comments on the topic of Judge Moore were clear and unambiguous both on radio and on TV, if people would do their own research and reporting. People need to listen to the totality of my remarks if they care about the truth. I interview guests of all points of view, but I speak for myself.”