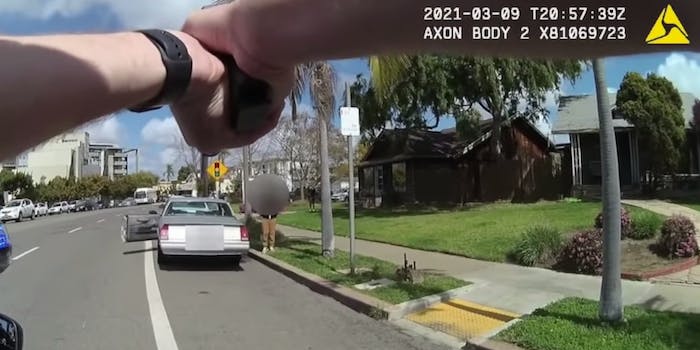 ‘Can you take the gun off him? He’s 8 years old’: Video appears to show cop pointing gun at child

The child's dad asks the cop to 'take the gun off him.'

The San Diego Police Department released body camera footage of an incident that initially caused an uproar. They released the footage after an image showed an officer pointing a gun at an 8-year-old boy.

The image was posted on the blog SanDiegoVille on Tuesday. The person who took the image is quoted as saying, “From my perspective the officer was pointing a gun towards the child as he was exiting the vehicle.”

However, on Wednesday, SDPD released bodycam footage of the incident to refute the claim.

In the seven-minute-long video released on Wednesday, the officers can be seen stopping the car and asking the passenger to get out.

At the beginning of the video, the car is a few feet away from the officers, and the man can be seen with his hands out the window.

He gets out of the car from the driver’s seat, hands behind his head, as one officer says, “What’s in your pocket?”

“Back up!” one officer orders him.

Another officer asks him, “Is there a gun in the car?”

A kid emerges from the passenger seat of the car.

“Hey bud, just put your hands up for us, all right?” one officer says. The gun of the officer whose bodycam footage was released is still raised toward the boy for a few seconds.

“Can you take the gun off him? He’s 8 years old, man,” the father is heard saying.

“Just come over to us. You’re good,” the officer says, lowering the gun, as the boy approaches them slowly with his hands raised.

The officer then politely asks him to sit on the sidewalk and says he doesn’t have to have his hands up.

The video has been used by SDPD to refute claims that the gun was pointed to the boy. Even though the video shows officers aiming for the father and being polite to the boy, the gun is pointed at the child for at least a few seconds.

In a later part of the footage, the officer is seen explaining to the child why they were pulled over.

“See, now, your dad was driving really really fast,” the officer explains, kneeling down and sitting next to the kid. “Did you hear the siren behind us for a while? Yeah, see, your dad was supposed to pull over when the siren was going, and he didn’t for whatever reason, and we didn’t know what was going on, so we had to pull out the gun and stuff like that.”

The incident took place on Tuesday when the father was driving at a speed limit higher than was allowed in the zone, according to the San Diego Union-Tribune. When he didn’t stop despite cues from the officer, the officer called for backup.

In response to the footage’s release, protesters reportedly gathered at the San Diego Police Department headquarters on Wednesday night.