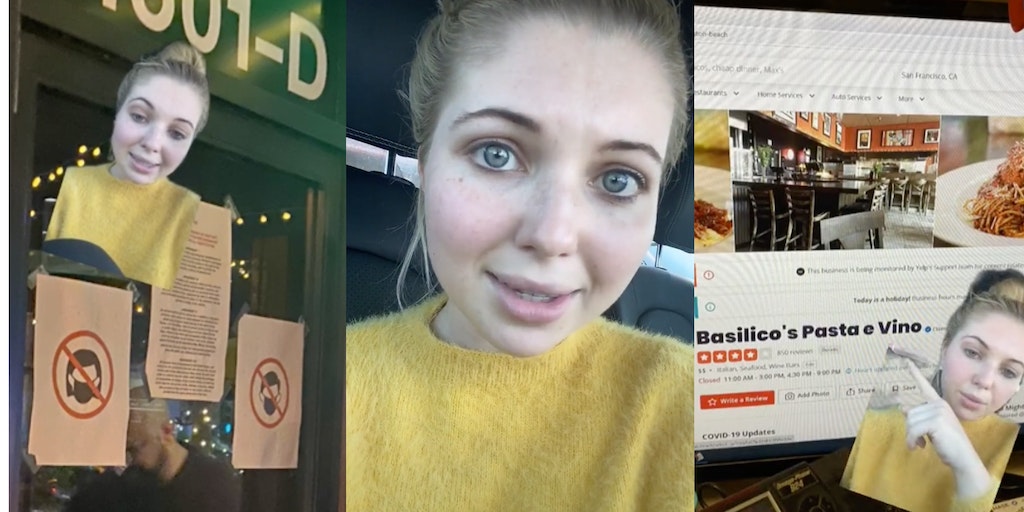 ‘This place needs to be shut down’: TikTok actress slams restaurant’s no-mask policy

The restaurant has been outspoken about its anti-mask stance for months.

Everyone is adjusting to the “new normal” brought about by the pandemic in their own ways, but as we’ve seen time and time again, some people find it difficult to compromise. But one California restaurant flat-out refuses to follow the rules at all.

In a now-viral TikTok, actress Sammi Hanratty shared her family’s encounter, and subsequent frustration, with a restaurant that refused to follow the guidelines in place to protect Californians from COVID-19.

Hanratty, known for playing Kassidi on Shameless and varous roles in family films, told viewers that her dad went to Basilico’s Pasta e Vino in Huntington Beach to pick up an order they had placed over the phone.

“He was wearing his mask because, you know, we’re in a pandemic, and my dad’s in his 60s, and he’s also in the medical field, so he has to be safe, not only for himself, but also for his patients,” Hanratty explains.

But once he arrived at the restaurant, Hanratty said her father noticed there were so many people dining in that it was likely “past 100% capacity,” despite Orange County requiring restaurants to cap diners at 25% capacity.

“My dad realizes, too, that he’s the only person inside that’s wearing a mask. Like, all the people that are working in there? No masks,” she continues. “And then he gets asked to leave because he’s wearing a mask.”

Orange County’s coronavirus guidelines mandate that people wear masks “inside, or in line to enter, any indoor public space” except when eating or drinking at a restaurant that allows six feet of distance between families and groups.

But Basilico’s Pasta e Vino has been forthright about its decision to shirk local requirements and safety protocols during the pandemic, even going so far as to take out a Godfather-themed billboard last month urging patrons to “leave the mask.”

Meanwhile, Basilico’s Instagram account has shifted almost entirely to anti-mask propaganda, sharing memes mocking Dr. Anthony Fauci and promoting “freedom.” A statement released by the restaurant’s owners over the summer clarified that masks must be immediately removed upon being seated at a table, and anyone who insists on wearing a mask while waiting for a pick-up order will be required to wait outside.

In regards to Hanratty’s video, Basilico responded in an Instagram post that it will “mess with” anyone who “messes with” the restaurant. The post called also accused the actress of being “reactionary and whiny, hiding behind your Chinese owned social media account.”

“If you were so upset about our no-mask, no-shutdown policies, then maybe you should have approached management, instead of unleashing your packs of anti-American zombies on us to do the work for you,” the message said. “We would have then educated you on why we have taken our position.”

Neither Basilico’s nor Hanratty immediately responded to the Daily Dot’s requests for comment.

Hanratty says in her video that “this place needs to be shut down” for pointedly disregarding pandemic safety.

“And you can’t leave a Yelp review,” she notes. Yelp shut down comments on Basilico’s profile after the restaurant was subject to one-star bombing from people equally frustrated with the restaurant’s current policies.

“So,” Hanratty says on TikTok, “I made this instead.”