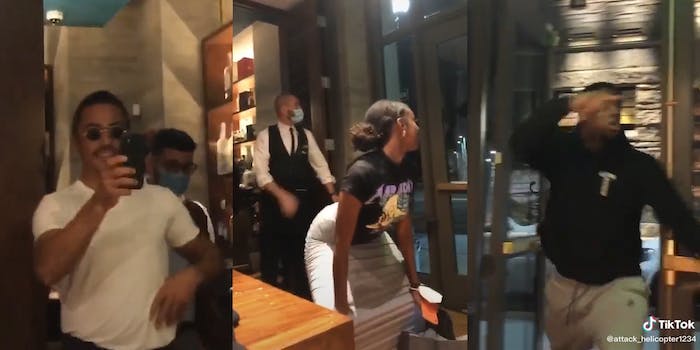 His abusive behavior shocked the internet.

In a TikTok video gone viral on Twitter, a woman was filmed twerking in front of Salt Bae—apparently at his restaurant—before her furious “boyfriend” charged through the door.

A woman is shown twerking at reportedly Nusr-Et Steakhouse though it’s unclear which location. Her friend is capturing the moment because the woman is shaking it for none other than the also-filming Salt Bae, in his own spot. The small, remaining crowd is yelling and enjoying the harmless dancing.

Everything was all good, right up until a man walks up. A server allows the man in, and he promptly charges into the restaurant. He runs toward the woman, cursing and making violent gestures toward her.

The meat-slapping and salt-sprinkling Nusret Gökçe, nicknamed Salt Bae, is a Turkish chef, social media-famous butcher, and restaurateur with a worldwide chain of protein-forward restaurants.

There are three current camps reacting to this trending video as of Monday morning. The first is the idea that the video is staged, which seems unlikely.

“What also is suspicious is that Salt Bae assumably works there, but he isn’t wearing a mask,” says @GodHamgod. “That goes along w my ‘staged’ theory bc if he had a mask he wouldn’t be recognizable and the video wouldn’t go viral. Please tell me why the chef isn’t wearing a mask during corona?”

Second, most users are upset about the abuse endured by the woman, especially within the current climate and the consideration of brutality against Black women. “I pray that the girl in the salt bae video is okay,” tweeted @burnitalldown. “What her man did was extremely vile and violent.”

Lastly, digging deeper, some people were defending the upset man. They blame her for twerking—as if that’s an act of adultery, which it is not. Even if it was, it wouldn’t excuse such an abusive and violent reaction.

That reading of and reaction to the video, that the man was right for yelling, has been squarely rebuked in the comments.

There isn’t much information or context to what’s taking place, or if the barge-in was real. The woman was having fun with Salt Bae, who was enjoying the moment. But several others were concerned with the video’s optics and did not see anything funny.

@BreOfficially tweeted in a thread: “That video of the girl twerking in salt bae’s restaurant is super alarming. yall are making jokes about it and condemning the girl for ‘entertaining people’. OVER A FUCKING TWERK. nobody was touching her, nothing.”

“And her (abusive) boyfriend burst through the door cause a scene and calling her out of her name. considering that the girl was black, i see people calling her a ‘hoe’ and saying how she was being ‘kept in check’ is dehumanizing.”

“[So]much for protecting black women, right?” she continues. “the number of black women harmed and/or killed this year, at y’all’s big ages, y’all shouldn’t be condoning abusive behavior and an abusive relationship. that shit needs to stop ASAP.”

The Salt Bae has other immediate concerns. His Boston restaurant, which had recently opened, was closed for numerous city and state COVID-19 and fire safety violations.

We’ve reached out to Salt Bae.