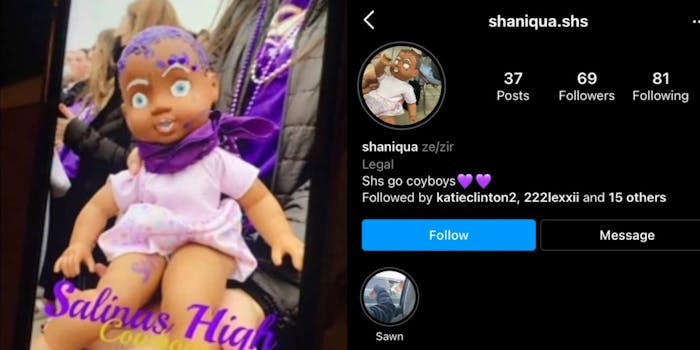 They drew an ankle monitor on the doll.

A California high school is facing backlash online after multiple students posted photos and videos of themselves defacing a Black baby doll they called “Shaniqua.” They created a since-deactivated Instagram account dedicated to the doll, where they posted photos of students holding the doll.

Twitter user @xolopiyotl posted a Twitter thread containing screenshots from the Instagram account, which was called “shaniqua.shs” and dedicated to the doll. In the pictures, the Black doll has its eyes, eyebrows, and mouth painted white. It also has scribble marks drawn all over its face as well as an ankle monitor drawn on it.

There was also a video posted to the Instagram featuring alleged Salinas High School students stomping on the baby doll.

A biracial senior from the high school anonymously spoke with the Salinas Californian about the doll. “When I found out the ankle monitor was drawn, that’s when I knew it was intentional,” the student told the newspaper. “People were not doing this as a joke.”

She told the Californian that she felt that doll was meant to “degrade Black people.”

“It was not funny. To me it was kind of sad because I grew up with this class, so it was like, ‘Wow, this is how you guys actually feel?’” she questioned.

The principal of the school, Elizabeth Duethman, reportedly sent out a letter to the parents on Monday, noting there is an ongoing investigation into the “racist posts” and that the school is “in the process of determining who was involved and what the consequences will be.”

The Daily Dot reached out to Duethman and the superintendent, Dan Burns, but did not immediately hear back.