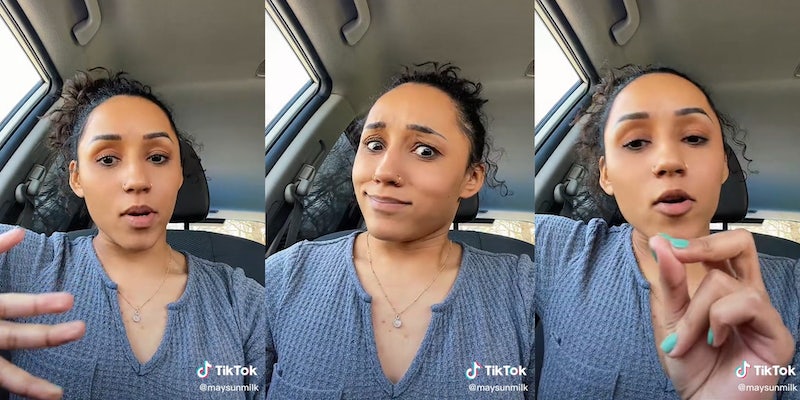 ‘That should be f*cking illegal at this point’: Woman says first ‘red flag’ at job was that it didn’t list pay on application

'We get to the end of the interview. He tells me the pay. It’s low.'

After a recent job interview that ended with a lower-than-expected pay offer, TikToker Maysun (@maysunmilk) has a message for people listing new jobs: Show the salary.

In a TikTok video, Maysun says that companies and hiring managers need to “grow up and … get a grip on reality,” noting that not showing the potential pay before an interview “should be fucking illegal.”

Maysun’s video has over 1.6 million views.

“I applied to a job where they didn’t list the pay. That was my fault. That was my bad. I should have known, red flag,” she says in the video.

Eventually, Maysun says she went to the interview. While it seems the interview itself went well, the ending did not.

“We get to the end of the interview. He tells me the pay. It’s low,” Maysun recalls. “So he asks me how I’m feeling, [and] I said, ‘Frankly, the pay is low, and I can’t work for that.’ … I brought up that it wasn’t listed on the job listing, and he was like, ‘Yeah, you know, here’s the thing: There’s a lot more here to gain than just money, and we’re looking for people that are motivated by more than just money.’”

It was comments like these that inspired Maysun to make a comment about employers and hiring managers needing to “grow up.”

“This is what I mean when I say they need to grow up,” she explains. “I don’t know what fantasy world you’re living in where people are letting you pay them in, like, gold star stickers or whatever the fuck, but I live in the real world where people need money to survive.”

Maysun’s predicament is surprisingly common. Speaking with CNN earlier in the year, chief economist at ZipRecruiter Julia Pollak shared that only 12% of job listings from American job websites include salary ranges. This is despite the fact that a 2018 study from Glassdoor confirmed that a majority of people (67%) say salary is their first consideration when searching for a new job.

In response to this, pay transparency laws, which required job listings to feature pay estimates, are becoming more popular. Colorado requires a general pay range on every job posting, and both the state of Washington and New York City recently enacted their own wage transparency laws to limit incidents like the one described in Maysun’s video.

In the comments under the original TikTok, users shared their support for Maysun, adding their own stories of workplace and interview issues.

“A hiring manager once told me that if money was my only motivation for work that she felt sorry for me,” a user recalled. “I asked her how long she’d worked for free.”

“The way that I used to work so hard for $9 an hour and all I got from it was trauma,” another said.

“Your generation is such a breath of fresh air. It was drilled into our heads that we never ever ask about the pay rate. That we wouldn’t be selected if all we wanted was money,” another wrote. “Thank you for putting into words everything I always felt about this!”

The Daily Dot reached out to Maysun via TikTok comment.