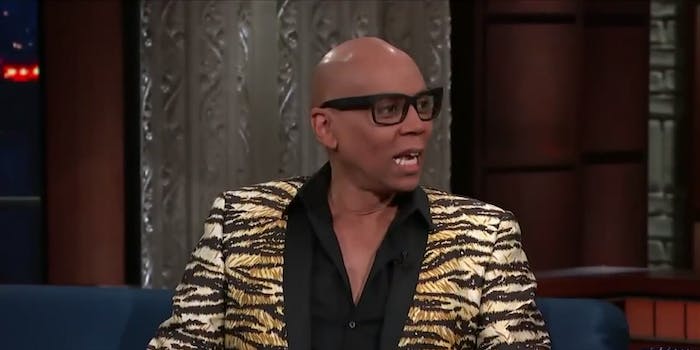 RuPaul apparently doesn’t know what the trans flag looks like

This is probably not the best way to apologize to the trans community.

RuPaul Charles has found himself in the internet’s crosshairs over trans insensitivities once again. Last week, the RuPaul’s Drag Race host argued that transgender people are not allowed to compete on the show. And now, it seems he doesn’t even know what the trans flag looks like.

The controversy began after RuPaul pushed back against letting “bio queens”—that is, cisgender women in feminine drag—join the show.

“You can identify as a woman and say you’re transitioning, but it changes once you start changing your body,” RuPaul told the Guardian last week, referencing hormone replacement therapy and gender affirmation surgeries. “It takes on a different thing; it changes the whole concept of what we’re doing.”

This quickly led to online backlash, one part of an ongoing history of transphobic comments by the host. So in an attempt to save face, RuPaul turned to Twitter with an apology, saying the trans community “are heroes of our shared LGBTQ movement” and his “teachers,” in a tweet with the rainbow colors of the Pride flag.

Each morning I pray to set aside everything I THINK I know, so I may have an open mind and a new experience. I understand and regret the hurt I have caused. The trans community are heroes of our shared LGBTQ movement. You are my teachers. pic.twitter.com/80Qi2halN2

But then RuPaul followed up the apology with a second tweet, in which he posted an oddly colored flag with green and yellow colors.

“In the 10 years we’ve been casting Drag Race, the only thing we’ve ever screened for is charisma uniqueness nerve and talent,” RuPaul tweeted with the sickly green colors underneath. “And that will never change.”

In the 10 years we’ve been casting Drag Race, the only thing we've ever screened for is charisma uniqueness nerve and talent. And that will never change. pic.twitter.com/0jsyt6MRvO

Fans quickly concluded that RuPaul meant to post the trans flag, but having no idea what the colors are, he must’ve typed in “trains flag” and went with an Ellsworth Kelly abstract art piece from 1953 called Train Landscape. (The trans flag is two light blue stripes, two light pink stripes, and one white stripe in the center.) Since then, RuPaul has been getting burned mercilessly online for the alleged mix-up.

time to fire your rupublicist

Is it because he’s trying to de-rail the conversation?? pic.twitter.com/XeBJRvTdIh

And while RuPaul acknowledged the controversy, the fact that he didn’t even know the trans flag’s colors suggests that he has a lot of work to do before he understands how to support trans people. Like learning how to say “sorry,” which is what trans activists want the most right now.

no, it’s saying “i’m sorry you were hurt by my comments”, not “I’m sorry that my comments were inappropriate and hurtful to an often disrespected part of our community”

trans people literally invented drag. we have every right to be upset that rupaul is denying trans women an opportunity to compete in a competition that is centered around a trans movement.

RuPaul’s Drag Race All Stars is currently on VH1, and the 10th season of original series will premiere later this March. It’s unclear if the host will eventually make changes to the format of the show, but many fans suggest RuPaul should bring on a trans queen next season to show his true commitment to his LGBTQ “teachers.” Time will tell if the drag superstar changes his mind.