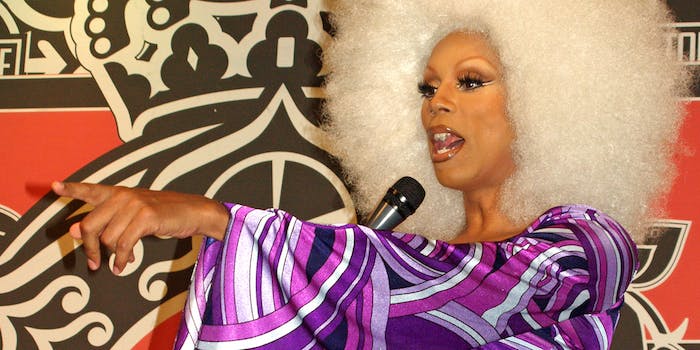 This week, RuPaul's Drag Race got called out for transphobia—again. When will RuPaul get his act together?

I often cringe while watching RuPaul’s Drag Race. Peering through Cheetos-stained fingers while clutching a glass of Merlot, I feel my skin crawl while bearing witness to the endless humiliations Ru demands of his queens—be it acting, singing, or worse yet, doing comedy. And yet I am drawn to the show for those glimmers of humanity (or even unexpected talents) that come with contestants stretching themselves far beyond their limits. Be it Stacey Layne Matthews’ brilliant turn as Mo’nique during season 3’s Snatch Game or Ongina’s emotional admission to living with HIV in season 1, Drag Race offers moments of profundity. I cringe because I care.

That’s why I’m call B.S. on the most recent mini-challenge thrown at season 6’s queens. On Monday night, Ru asked the queens to determine if zoomed-in body parts of demi-celebrities (such as lips, legs, or a pelvic region) belonged to a “bi-o-logical woman” or a “psy-cho-logical woman.” Queens were given signs to hold up with the helpful indicators of “female” or the ever-charming “shemale.” Needless to say, it was a cavalcade of misgendering, misogyny, and transphobia.

Was disappointed @ blatant transphobic minigame on @RuPaul drag race this week. You have had trans contestants! Get it the F together!

Throughout the absurd segment, I kept wondering: Why, Ru? What is the goal of this challenge?

Ru has come under harsh scrutiny before for using the slur “tranny” in songs and public performances. His responses have largely ignored criticisms from the trans community as “ego-driven,” saying queens have “earned the right” to use these words and that he loves the word tranny. Dan Savage has similarly chided the LBGT community for its “draconian” policing of language, saying all this in-fighting will ensure we “lose the war” against conservative bigots. While both Ru and Dan have both remained vigilant in their stances, gay male celebrities like Neil Patrick Harris and Lance Bass have both apologized after using the phrase “tranny” in public.

This leads me to wonder: With the firestorm surrounding Ru’s previous comments, why would he choose to antagonize trans activists and allies in such a brazen way?

As much as I appreciate Drag Culture as an art form, it’s offensive and unacceptable for them to use Transphobic terms. Please stop @RUPaul.

For the sake of argument, let’s say the Drag Race challenge was merely an attempt to be funny (“Don’t be so serious, guuurl!” you can imagine Laganga Estranga saying in another cringe-worthy display.)

So let’s unpack that a bit. The cast of semi-famous body parts the drag queens were asked to identify ranged from the “Tan Mom” Patricia Krentcil’s legs and pro wrestler Chyna Doll’s waist to the crotch of Drag Race alum Raven. The humor arises when queens guess wrong. The queens find it particularly hilarious when cis-females are read as men in drag. Look at how colossally these women fail at performing femininity! We laugh as the camera pulls back to reveal that Chyna Doll’s muscled physique belongs to a “woman” and not to the “shemale” we thought! One queen even quips, “I’m still not sure if I got it right or wrong” when we see Chyna Doll’s face.

I’m always just really disappointed whenever I’m reminded of just how transphobic rupaul is. Like… Really? “Female or she-male?”

In the reverse scenario—say, when a contestant guessed that Raven’s crotch was a “female” one—the camera would pull back to queens responding with an impressed gasp. Now that’s how you do it, you can imagine them thinking.

At its best, Drag Race offers us a glimpse into the way that “all gender is drag,” to borrow a phrase from Ru himself. This is particularly salient and powerful when queens poke fun at themselves as a means to expose the arbitrary boundaries we draw around gender (think of contestant Milk’s decision to don a long gray beard while in full drag).

I love RuPaul…but he is transphobic as fuck. I haven’t forgotten that joke about the difference between a drag queen and trans person.

But at its worst—and as this challenge revealed—it’s an opportunity for cis gay men to re-draw the very gender lines they claim to push against. This mini-challenge was not an example of how marginalized groups reclaim derogatory language to talk with and about one another in empowering ways (a la Paris Is Burning). This challenge actively encouraged cis-men to lob the epithet “shemale” at cis-females for a laugh. It’s misgendering brought to you by Scruff.

Ru claims that intention is all that matters and if these words are used “within the family” and said “with love,” everyone should get over themselves. While I agree with that logic to some extent, it just doesn’t apply to this scenario. Ru has given cis gay men like myself tacit endorsement to use the phrase “shemale” as a hilarious insult to lob not only at one another but to unsuspecting cis-women as well. And this is to say nothing of the trans and gender non-conforming folks for whom misgendering may be a daily struggle.

Dan Savage has warned us to avoid all this pesky in-fighting, lest we lose sight of the “real enemy.” I would agree with him, if his plea were something more than a tactic to silence trans and other dissenting voices. Language is complex and scary and ever-evolving. I do not advocate for a culture that fears language. But to ignore the violence of certain words—to avoid recognizing the violence such words help normalize and validate—is as much a disservice to trans and queer people as a conservative talk-show host spewing against same-sex marriage.

I know Ru and company can do better. RuPaul has gone against his own advice: He has f**ked it up. But in the immortal words of Latrice Royale, “It’s OK to fall down. Get up, look sickening, and make them eat it.”