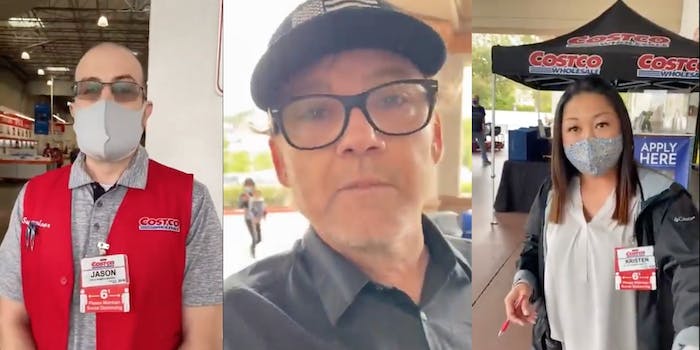 'I'm getting my refund from Costco.'

Former child actor Ricky Schroder recently filmed himself harassing an employee at Costco over the company’s policy on face masks.

In footage shared widely across social media this weekend, Schroder, who was a child star on the sitcom Silver Spoons, can be seen arguing with a worker while standing outside a Costco in Los Angeles.

After demanding to know the name of the store’s front end supervisor, Schroder, who is not wearing a mask, repeatedly asks why he isn’t being let into the store.

Despite attempts by the employee to explain the state’s mask mandate and the rules put in place Costco, a privately-owned business, Schroder insists that the company no longer requires face coverings.

“Didn’t you see the news? You didn’t see the news?” Schroder asks. “Nationwide, Costsco has said you don’t need to wear a mask.”

Contrary to Schroder’s claims, Costco did not announce a nationwide reversal of its mask policy. The company instead on Friday announced that U.S. locations with no state or local mask requirements may permit vaccinated members to not wear a mask in certain parts of the store.

“In Costco locations where the state or local jurisdiction does not have a mask mandate, we will allow members and guests who are fully vaccinated to enter Costco without a face mask or face shield,” the company said in a statement. “We will not require proof of vaccination, but we ask for members’ responsible and respectful cooperation with this revised policy. Face coverings will still be required in healthcare settings, including Pharmacy, Optical, Hearing Aid. Costco continues to recommend that all members and guests, especially those who are at higher risk, wear a mask or shield.”

When Schroder is informed by the employee that he has misinterpreted the policy update, the actor interrupts with a rant about the state being destroyed by the lockdown measures.

Schroder goes on to reveal that he had already asked to speak to the manager in order to have his membership canceled.

After being handed a receipt for his refund, Schroder finally leaves the property.

The actor’s name began trending on Twitter on Sunday after the video went viral.