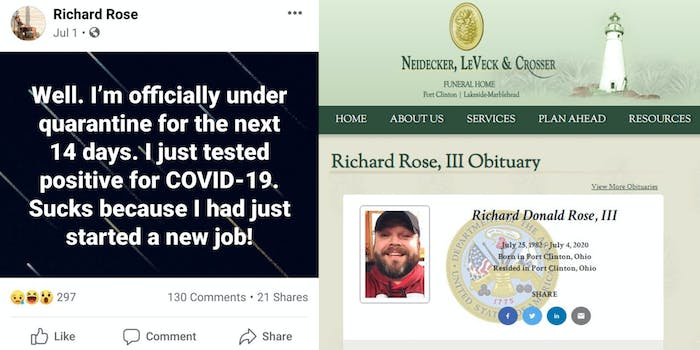 Richard Rose, 37, passed away on July 4 from complications from COVID-19—several months after he posted to Facebook he didn’t believe in wearing face coverings.

His now-viral posts, authenticated by Heavy, show Rose posting about attending a crowded outdoor public pool, where he likely caught the deadly virus.

“Let’s make this clear. I’m not buying a mask. I’ve made it this far by not buying into that damn hype,” Rose posted to Facebook in April. According to Cleveland 19, the post was shared over 10,000 times.

In June, Rose wrote that he was going to Put-in-Bay at South Bass Island in Ohio. He shared a crowded photo of the pool with the caption, “It’s not that packed lol.”

Rose later says he thinks he caught the virus while attending the Bay event. He tested positive for COVID-19 on July 1.

“I’ve been very sick the past few days. Symptoms of Covid-19. This morning I finally got swabbed,” Rose wrote on July 1. “I should know soon what the results are. I just want to feel good again!”

Later that day, he confirmed he tested positive. He wrote: “Well. I’m officially under quarantine for the next 14 days. I just tested positive for COVID-19. Sucks because I had just started a new job!”

When friends asked how he was feeling he said he felt “wore out.” He also noted, “I can barely breathe now.”

On July 2, he said his symptoms got worse. “This covid shit sucks! I’m so out of breath just sitting here,” he wrote.

He died on July 4, and his online obituary is now being posted online. His family says he had no known pre-existing health conditions.

Family and friends described Rose, an Army veteran, as kind, funny, and caring.

Nick Conley, a friend of Rose’s says he hopes his death will serve as a warning to others.

“I know a lot of people that haven’t met someone that they know of that has been diagnosed with the virus and I wanted people to see it was real and my hope is that people will see that this does happen and people will be more cautious,” Conley said.