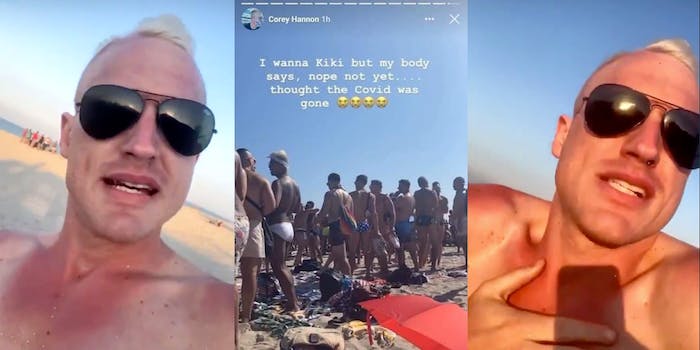 'I hope all of you get f*cking COVID,' he says in a video after being called out.

Fourth of July brought an alarming number of people to beaches, cookouts, and various other parties throughout the U.S. that had absolutely no chance of maintaining proper social distancing guidelines in the time of coronavirus.

On Fire Island, the parties were particularly dense, as people flocked to the beaches from New York City and other nearby locations. Photos and videos shared to social media caused outrage over the refusal to follow guidelines and try to stop the spread of COVID-19.

But one party-goer, in particular, caught the attention of folks online as he appeared to admit to being infected with COVID-19 while actually hanging out on the beach for the holiday.

Corey Hannon shared a photo to his Facebook Story of himself sitting down while crowds of people gathered nearby.

“I wanna Kiki but my body says, nope not yet….thought the Covid was gone,” he captioned it.

On his Facebook, a post, which was dated June 30, reads, “Day 7 and my body has decided it is done with COVID-19.” A follow-up that appears to have been posted around the same time as the beach photo says, “Fuck you Miss Rona. I thought I was cured.”

Many people who have come down with COVID-19 over the past few months reported briefly feeling better after a few days before getting hit with a second wave. That’s one of many reasons why experts recommend self-quarantining for at least 10 days after symptoms first appeared and three days after a fever breaks, assuming respiratory symptoms have also disappeared by that point.

Hannon’s post went viral, and people began calling him out for being irresponsible and selfish.

After facing backlash, Hannon jumped on Instagram, where he posted a video defending his decision to celebrate after “suffering” through eight days of quarantine in his bedroom.

“I hope all of you get fucking COVID,” he rants in the video.

According to @YourHighnessDG, Hannon also made a friends-only post on Facebook insisting he didn’t put anyone else at risk.

Hannon obviously wasn’t the only person refusing to social distance or wear a mask during Fire Island celebrations (he said he always wore his, but… the video he posted proves otherwise).

Photos from the beach show people packed together, and screenshots from the social media of others there prove that some folks just absolutely did not care that they might contract or spread COVID-19.

The frustration from people watching everything unfold from the safety of their own homes—where everyone is stuck because people like the Fire Island partiers refuse to just be responsible for a single month—has been palpable.

It will genuinely be surprising if we don’t see an uptick in positive COVID-19 tests in the next two weeks, as the fallout from Fire Island parties and others like it becomes quantifiable. Maybe for the next mid-pandemic holiday coming up, we can all just agree to stay home.