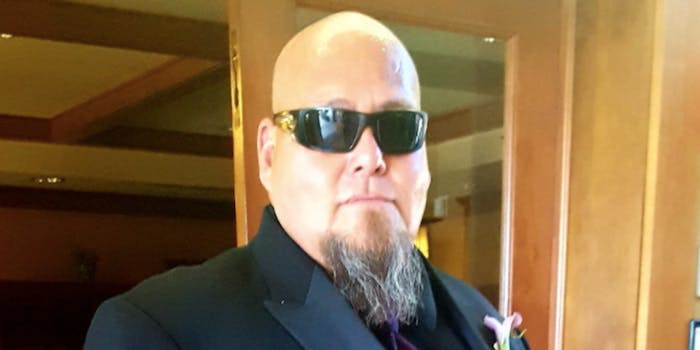 'If you have to go out, wear a mask and practice social distancing.'

Facebook user Thomas Macias wrote a heartbreaking warning to his family and friends hours before he died from the coronavirus.

In his final message, Macias warned his loved ones that the coronavirus is “no joke.”

“If you have to go out, wear a mask and practice social distancing,” Macias wrote. “Don’t be a f*cking idiot like me.”

The 51-year-old California native was cautious during the early months of the pandemic, according to BuzzFeed News. His diabetes, along with the health of his aging mother, motivated Macias to carefully adhere to the CDC’s recommended measures to prevent spreading the virus. As lockdown measures began easing, and American discourse began turning away from coronavirus-related concerns, Macias began to relax. BuzzFeed News reported that he stopped donning a mask every time he left the house, and when a friend extended an invitation to a barbeque, Macias accepted.

A few days later, he was beginning to experience symptoms. However, he though his illness was non-threatening and connected to his struggle with diabetes. It wasn’t until a visit with his family, at which his siblings noted his unhealthy appearance, that Macias realized he might have the coronavirus. A call from a friend, who’d attended the barbeque and tested positive, solidified his fears.

The friend, who Macias refused to identify to his family, told him he’d tested positive for the virus prior to the party. They thought it was alright to attend a gathering because they were asymptomatic. The CDC and other health officials have warned the virus can be transmitted even if a carrier shows no symptoms.

Marcus was immediately concerned––more for his family than himself. He realized he may have put them at risk.

“I f*cked up and went out a couple of weeks ago and I contracted the coronavirus,” Macias wrote in the now-private Facebook post. “Because of my stupidity I put my mom and sisters and my family’s health in jeopardy. This has been a very painful experience.”

Macias’ family all later tested negative for the virus. While he was busy agonizing over their health, his own was declining rapidly. By the Saturday that his Facebook post was penned, he phoned to tell his siblings that he was struggling to breathe, according to BuzzFeed News.

“He was starting to feel better on Friday, and then Saturday he called saying he was having a really hard time breathing,” Macias’ niece Brianna Lopez told BuzzFeed News. “That’s when it took a turn for the worst.”

Lopez noted that she believes her uncle’s story, which has been widely shared on social media, resonates with people because he took responsibility. Loosened restrictions, she noted, along with messaging from the highest points of government, gave Macias and many others a “false sense of security.”

“He acknowledged that it was dumb of him to go out in the first place,” Lopez told BuzzFeed News. “I hope people understand how serious this is. Even if you have it and you don’t have symptoms, it’s not OK to go out just because you think you can’t pass it on to others.”