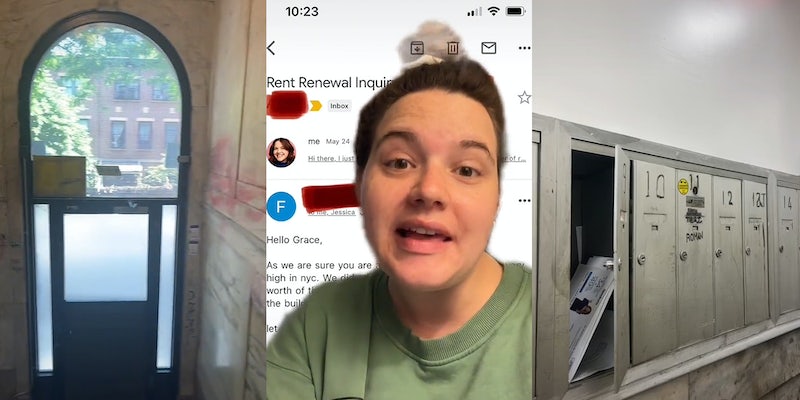 ‘Housing should not be a privilege for the elite’: TikToker puts landlord on blast after they try to increase her rent by $700

'Ask them what $8k worth of improvements they've done in the past year.'

A TikTok user has gone viral after showing an alleged email from her landlord increasing her rent by $700. User Grace Pinegar (@vinegarwithap) says that her landlord explained to her via email that they are increasing rent because the higher rent better reflects “the worth of the apartment.”

However, as Pinegar notes in the now-viral video, numerous issues with the apartment would bring that assessment into question, such as unclean hallways, water damage, and chipping paint. She highlights all of these issues while sarcastically singing “it’s what the apartment’s worth.” Pinegar clarified in a comment that the email came from Frontgate Property Management in Brooklyn, New York.

Rental prices in New York are rapidly increasing. A report from real estate brokerage firm Douglas Elliman claims that the median rent in Manhattan increased by just under 30% in the last year, with rents in Brooklyn increasing by nearly 20% over the year.

In Pinegar’s video, her landlord cites this citywide price increase as one of the reasons her apartment is going up in price.

This enraged some users on TikTok.

“They’re acting like it increased against their will,” one user wrote.

“Ask them what $8k worth of improvements they’ve done in the past year,” agreed another.

In general, New York City landlords are allowed to raise rents as much as they like at the end of a lease term, so long as the apartment is not rent-stabilized. The landlord must provide notification of this rental raise within a fixed time period depending on how long the tenant has lived in the apartment.

Some users told Pinegar that she should simply move to a different apartment. As many New York apartments command similarly high prices, it is unclear whether doing this would actually solve her issue.

The creator claims in a follow-up video that comments like these fail to see the bigger issues with housing today.

@vinegarwithap Reply to @woahnyc88 I have so many more thoughts on this but here’s a short reply :-) #fyp #housingcrisis #nyc ♬ original sound – Grace Pinegar

“I think in the U.S. there’s this common understanding that cash is king, the poor are just shit out of luck, and if you can’t afford something, you should just leave,” she starts in the video.

“In a luxury industry, I think that makes sense. Like, I would never go to a steakhouse expecting McDonald’s prices,” she continues. “The difference here is that housing is, in my personal opinion, a basic human right.”

She further explains that she believes everyone should be housed, regardless of their income or ability to work, and that cities that wish to have things like coffee shops, music venues, parks, and more must be able to provide housing for the people who will work at these establishments that those workers can afford.

Pinegar then says that getting priced out of this apartment will remove her from a community, as she has befriended people in the building and has established a life in the area. Continuing to raise prices, she says, encourages a culture of not investing in a community because no one can be certain of its future.

Users on TikTok were generally supportive of this sentiment.

“Should have the right to have a roof. Prices seem to be only for the elite,” one user wrote. “What about the rest? They are all people! We are all people!”

“Amen I agree 100%!” another added. “Just because some can afford high rents doesn’t mean we get to act like those that can’t afford it experiences don’t matter.”

The TikToker later offered more information in a message exchange with the Daily Dot.

“We signed August 2021 at $2,500/month. In [May] we got a notice of increase to $3,250. We heard our neighbors were only getting around 50 -100 increases, so we emailed to see if that was the right price or if they had sent us the wrong paperwork,” Pinegar tells Daily Dot via Instagram direct message. “That’s when they sent us the email — ‘it’s the worth of the apartment.’…My roommate has an email thread where they basically told her — ‘the owner of this building doesn’t want to negotiate below a certain amount because they know they could get that much ($3,250) if the unit was on the market.’”

“We counter-offered for $2,650, and they rejected it,” she noted. “I wanted to fight our landlords via a rent strike, but my roommate and I had different levels of comfort with how that would affect us and our housing situation. Ultimately — she is staying here with a new roommate, and they ‘negotiated’ rent down to $3,100; I have decided to leave New York over this and go be closer to my family in Texas.”

As previously stated, landlords can only raise rents on stabilized apartments by a certain percentage once a lease has expired. According to Pinegar, it’s possible her apartment meets those requirements.

“I was working with a tenants’ rights advocate who reviewed my rent history and said our unit was still rent-stabilized, and that we had a good case to fight — but again, I was the only half that was up for the battle that could have ended in court,” she explained. However, she later noted that there was some confusion about the law that may put the apartment’s true stabilization status into question.

Regardless of her current position, the creator had some final notes for viewers of her video.

“I think I would just like to emphasis that tenants have more rights than landlords and property managers would like for us to believe, and to encourage everyone to start a tenants union in their building because they have power in their numbers,” she concluded.

The Daily Dot has reached out to Frontgate Property Management via Facebook message.