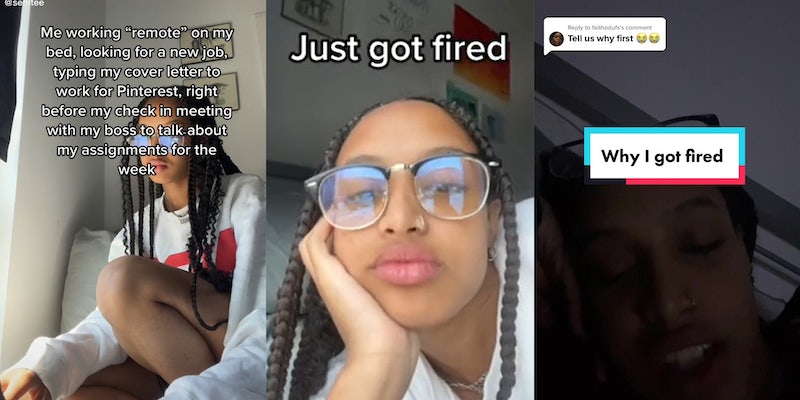 Update: In an email to Daily Dot, Senite clarified that her video was a skit playing on a relatable trend, and that the job in question was actually seasonal and had reached its conclusion.

Original story: Recently, a TikToker went viral after saying that users should think twice before posting a video claiming they don’t work hard, warning that doing such a thing could result in them being fired. Now, what appeared to be an example of this phenomenon has gone viral on TikTok.

First, user Senite (@senitee) posted a video of herself on the computer, writing in the overlay text: “Me working ‘remote’ on my bed, looking for a new job, typing my cover letter to work for Pinterest, right before my check in meeting with my boss to talk about my assignments for the week.”

This video accumulated just over 6,500 views.

However, it was the follow-up that went viral, quickly amassing over 86,000 views. In this follow-up, Senite makes a stitch with the above video, adding in the overlay text that she was fired.

In the comments section, users speculated that Senite was fired for the above TikTok, with many saying that they themselves needed to be more careful when posting to the platform.

“They saw the tik tok huh,” wrote one user.

“Brb gonna go private all my work tiktoks,” added another.

Others speculated about how her employer could have found her TikToks in the first place.

“If your boss has your phone number in their cell/ vice versa TikTok will recommend your videos to them,” noted a commenter. “Learned that the hard way on my other account.”

While it initially appeared that the TikTok was the cause of the firing, in a follow-up, Senite says that the true reasons for her being let go were a bit more nuanced.

In short, Senite says she is a musician who has recently found considerable success. Because of this, she says she’s had to spend time outside of work on music.

While she says she mostly enjoyed her co-workers, there was a sense of classism about them that bothered her. Owing to this, and factors like her musical career, she says she began to lose interest in her job, which affected her workplace performance.

As a result, she was “fired for not being passionate.”