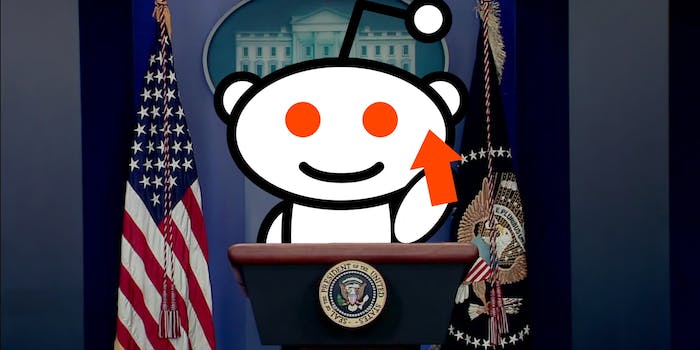 Here are the users who mattered most in Reddit's year of the ban.

If there’s one word that defines Reddit this year, it’s “ban.”

The site’s staff had their hands full this year. With more than 90 million unique visitors in November alone, businesses, media organizations, and marketing firms did everything they could to siphon even a morsel of traffic. And users continued to find new ways to unleash the power of the hivemind to go good, weird, and ill. From the world’s most popular meme generator to a subreddit determined to find the Boston bombers, no one was safe from the site’s banhammer.

Here’s our list of the most influential people on Reddit this year. We considered which users contributed the biggest ideas to the community, who made the biggest changes, and who used their Reddit influence to affect the world outside the site’s pastel-blue walls. It’s in no way scientific, and we admit, mostly subjective. Agree? Disagree? Weigh in below, tell us what you think on Twitter (@fernalfonso, @kmmokai), or join the discussion on Reddit itself.

The Reddit investigation went on for three months. It involved a private subreddit, countless conversation on Internet relay chat (IRC), and some serious Internet detective skills. In the end, three redditors—manwithoutmodem, jokes_on_you, Yourfriendshateyou—discovered one of the largest vote-rigging scandals Reddit’s ever seen.

And at the center was Thomas Wayne Miltz, the creator of Quickmeme, an image site where people could add bold-faced captions to memes like Scumbag Steve and Awkward Penguin. For months, Miltz and his company had used bots to upvote posts featuring links to the site and downvote others from competitors. And to hedge his bets, he infiltrated the moderator ranks of Reddit’s largest meme forum, r/AdviceAnimals.

In late June, the three redditors presented their findings to Reddit administrators, who promptly issued a site-wide ban on Quickmeme. At the time, it was the third-most submitted domain on Reddit, with more than 1 million posts. Only the photo-sharing site Imgur and YouTube had more posts, with 8.9 million and 3.6 million, respectively.

2) The r/findbostonbombers moderators | The FBI’s most mettlesome

Boston was in lockdown. Three people had been killed and more than 260 injured in an attack near the finish line of the Boston Marathon. A manhunt unlike anything Americans had seen since Sept. 11, 2011 was underway. On Reddit, thousands of users were poring over photos and videos of the April 15 attacks—information they published to r/findbostonbombers.

Two days after the attack, using information gathered on Reddit, the New York Post ran a photo of two men it alleged were persons of interest in the case. The newspaper has a circulation of more than 500,000 and its website is one of the most visited in the U.S.. The newspaper, and Reddit’s sleuths, were wrong. The men had nothing to do with the bombing. After that misfire, redditors found a second top suspect: Sunil Tripathi, a Brown University student who had been missing since March. He, likewise, was completely innocent.

In the end, r/findbostobombers was shut down. And Reddit issued an apology to the Tripathi family. “The Reddit staff and the millions of people on reddit around the world deeply regret that this happened,” general manager Erik Martin wrote.

From a presidential AMA to Adrian Chen’s Violentacrez expose, Reddit was all over mainstream news in 2012. Few stories broke through the same way this year—except, of course, the great r/politics ban controversy. In a move that many equated to censorship, the moderators of r/politics blacklisted a set of news sites that didn’t meet their standards of quality, including important national outlets such as Mother Jones. Cue condemnatory writeups in the media—and an important debate on who has a right to decide what qualifies as “real” journalism. While it’s impossible to know who on Reddit made which decisions—moderator discussions happen mostly in private—TheRedditPope, an r/politics mod, quickly became one of the most vocal and recognizable defenders of the ban.

In May, ChuckSpears, one of the moderators of r/n***ers, alerted members of the white supremacist subreddit that Reddit administrators were systematically targeting and shadowbanning them. The bans were, Reddit admins said, the consequence of r/n***ers subscribers acting as a “downvote brigade,” systematically going to another subreddit whose views they disagreed with and burying their submissions and comments with downvotes. ChuckSpears stepped down from other subreddits he managed, including r/TrayvonMartin (devoted to ridiculing the slain teenager and painting George Zimmerman as a hero) and r/WhiteRights, explaining that he hoped to spare them from a similar fate. He was shadowbanned in July. Taken on its own, the Chuckspears ban might have been a blip on the radar. But as part of the whole, it represented the Reddit’s continuing struggle to wrestle with the conflicts inherent in its free speech community.

Every so often, a subreddit comes along that carves out an entirely new subculture for Reddit and the Internet at large. This year, that honor goes to r/cringe, a place to indulge your pleasure in watching people shamefully embarrass themselves. The subreddit spawned two sister forums, r/cringepics and r/rage, all created by redditor Drumcowski. Together, they exploded in popularity this year, earning a combined total of 580,000 subscribers. But as the increase in popularity has given rise to people calling the subreddits platforms for bullying. For example, one of the trends on r/cringepics is to post screengrabs from Facebook with little or no context. While real names are blacked out, according to Reddit’s rules, faces never are. The subreddits pose an interesting challenge to notions of privacy online: Should private Facebook posts be used for the amusement of 500,000 strangers?

The Reddit celebrity is a strange creature, feeding, as they do, off the fickle and irrevent and ephemeral adoration of the site’s users. You can be famous just for owning an explicit username (say, POTATO_IN_MY_ANUS) or simply wanting to be famous and asking the community to make you so. Such fame is almost always fleeting. That’s what makes Unidan so special. The ecologist and amateur comedian jumped to the front of the Reddit karma train thanks to his long, thoughtful, and often hilarious comments on everything from murderous insects to trackballs. He’s just an ordinary guy who’s really really really good at commenting on Reddit. At if that’s not the archetypical Reddit celebrity, then what is?

Earlier this year, UpMan smashed karmic records, accumulating 100,000 of Reddit’s Internet points karma in the shortest time frame ever—just 11 days. Of course, in the eyes of Reddit’s karma fat cats, the Upman’s feats are somewhat unremarkable; he is simply the latest to beat a record will only continue to fall. But still, he perhaps best personifies the conflict at the heart of Reddit’s rewards system: Karma is meant to reward quality. But as Upman proves, the system can be gamed perhaps more easily than that of any other social network (except Facebook, where sites like Uporthy have turned exploiting social weaknesses into a new business model). One hundred thousand karma later, the question remains: Did UpMan ever contribute anything worthwhile to Reddit?

Every few years, it seems, redditors suddenly remember that they can actually give money to Reddit, in the form of a monthly freemium service called Reddit Gold. This is important because, as most of the community learned in October, Reddit doesn’t really make very much money. The reason? The company’s admirable devotion to its users’ experience—and their privacy. Redditors go about their daily lives pretty much blissfully unaware of all this. So RyuKenya deserves place on this list for single-handedly bringing Reddit Gold to the community’s attention with one post on Oct. 17, which jumped right to the front page. Three days and 568 years worth of Reddit gold later, the site was $32,000 richer. That’s hardly, you know, $1 billion. But Reddit will take what it can get.

9) The users of r/PCMasterrace | Master trolls

There are few spectacles that provide the type of hathos-induced pleasure on the Internet than an inter-Reddit drama war. But as Reddit shows again and again, even the most innocent conflicts can escalate to absurd and scary levels. For a few days in November, the age-old and completely pointless conflict between console gamers and PC gamers exploded into a vitriolic warfare on Reddit. It began rather mundanely: r/gaming mods were removing pics of PC gaming rigs, while console rigs were allowed. Cue users of the r/PCMasterace forum spamming r/gaming with pics of PCs. As things escalated, one r/PCMasterace user dug up the personal identity of an r/gaming moderator, then proceeded to assume his identity and call the police, “confessing” to the murder of his girlfriend and admitting he was in possession of a bomb. Totally reasonable! The entire subreddit was soon banned. And then reinstated. Fair enough: Only a small portion were guilty of the most egregious trolling.

10) douglasmacarthur | The “Joseph McCarthy” of r/news

There was about two and a half hours left before the stroke of midnight on Valentine’s Day and moderator douglasmacarthur needed some help. He wanted the community to suggest additions to a tentative list he and his moderator counterparts were compiling: domains to ban on r/news, a default subreddit with more than 1.1 million subscribers.