Sunil Tripathi, a missing Brown University student, briefly trended on Twitter last night after police chatter identified him as one of the Boston Marathon bombing suspects.

Sunil Tripathi is innocent. His family has known this all along, even as a police scanner in Boston supposedly named him as one of the two subjects in the Boston Marathon bombings, and even as his name briefly trended worldwide on Twitter early Friday morning. Their son is kind and sweet, the family wrote in a Facebook message posted earlier this morning. And he could never do such a monstrous thing.

How did his name ever get in the mix? Tripathi, a Brown University student who has been missing since March 15, is a victim of two small coincidences which tenuously tied him to one of the biggest news events of the past decade. First, he went missing weeks before two bombs exploded at the Boston Marathon, killing three and injuring more than 180. Second, Tripathi’s profile—with his sharp eagle nose, strong chin, and dark hair—bore some resemblance to the grainy images of the men identified as the bombing suspects yesterday by the FBI. Suspect two, nown know to be Dzhokhar Tsarnaev. His profile bears some resemblance to Tripathi, picture above. Photo via FBI.gov.

Tripathi was the suspect of massive Internet speculation early Thursday after the FBI released photos of the suspects, speculation that only seemed confirmed by a message that went out over police scanners and was then relayed on Twitter.

Shortly after the bureau released a second set of photos at around 2am Friday morning—hours after the murder of police officer Sean Collier on the MIT campus and shortly after a firefight in Dorchester—a former classmate of Tripathi’s seemed to confirm that he was suspect number two. 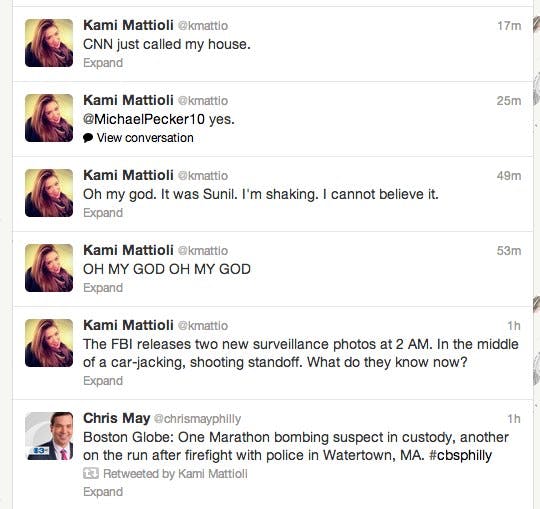 But within an hour police told NBC’s Pete Williams that the speculation surrounding Tripathi was wrong. Authorities told Williams the two men being pursued by police across the streets of Watertown were recent immigrants to the United States. Later reports identified them as brothers from Chechnya,  Dzhokhar and Tamerlan Tsarnaev.

Tripathi, a 22-year-old undergraduate on leave from Brown, was last seen at his Providence, R.I. apartment around 7:30 p.m. on Friday, March 15. Providence police and the FBI have been searching for Tripathi, and his family released a YouTube video earlier this month, pleading with him to come home.

Meanwhile, as the world’s attention is now swinging away from Tripathi, as it’s obvious he never had any association to the case, his family is still frantically searching for him. Early Friday morning they posted this message to Facebook:

A tremendous and painful amount of attention has been cast on our beloved Sunil Tripathi in the past twelve hours.

We have known unequivocally all along that neither individual suspected as responsible for the Boston Marathon bombings was Sunil.

We are grateful to all of you who have followed us on Facebook, Twitter, and Reddit—supporting us over the recent hours.

Now more than ever our greatest strength comes from your enduring support. We thank all of you who have reached out to our family and ask that you continue to raise awareness and to help us find our gentle, loving, and thoughtful Sunil. 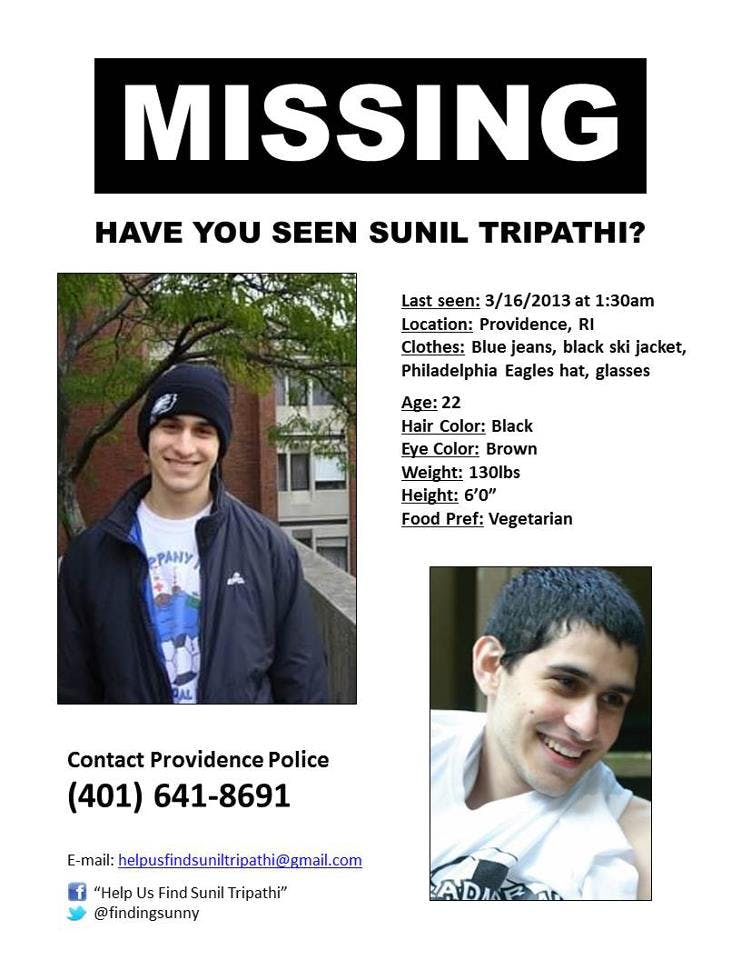