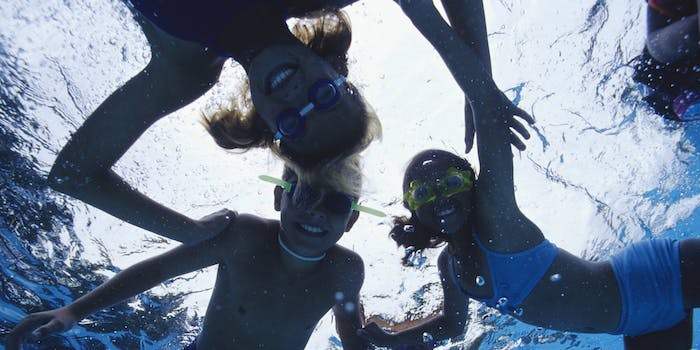 The American Red Cross issued a statement yesterday apologizing for a pool safety poster that many criticized for being racist. We’ll forgive them if they were too busy bringing supplies to West Virginia flood victims to notice, but in the parlance of the poster, not cool, guys.

Hey, @RedCross, send a new pool poster to @SalidaRec bc the current one they have w your name on it is super racist pic.twitter.com/TY8MmFB3Qk

Ebony Rosemond, who runs an organization called Black Kids Swim, told NBC 9News she was disappointed that the Red Cross didn’t see the problems with it. “When I saw the poster, I just, was just very saddened that the Red Cross had chosen to put out an image that might, one, discourage African-Americans from trying swimming if they were new to it, and also something that would extend a negative stereotype,” she said. “How can an organization that prides itself on being so open-minded, so understanding of the diverse populations of the world, create something like this?”

America has a history of anti-black racism when it comes to swimming, from policies that banned black people from public pools and beaches, to the ongoing stereotype that black people can’t swim (which, to the extent that it’s true, is because of those racist policies.)

The Red Cross responded by saying it was removing the poster from its site, and followed up yesterday with a formal apology. “Our organization has emphasized to our partners and on social media that it was absolutely not our intent to offend anyone and apologized for this inadvertent action,” the Red Cross wrote. “We are currently in the process of completing a formal agreement with a diversity advocacy organization for their guidance moving forward.”

However, they also call the ordeal a “misunderstanding,” which is at the top of the list of “Phrases to Use When You Are Giving a Half-Assed Apology.” Other phrases include “We’re sorry you’re offended” and “If we were wrong, there is no excuse.”