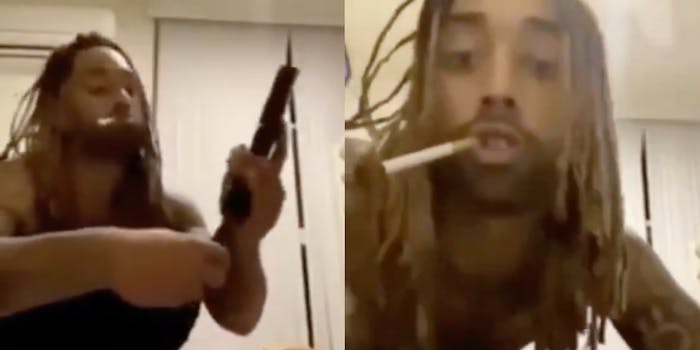 'It's graphic and disturbing. It made me sick to my stomach.'

New details have emerged after a 29-year-old man live-streamed himself with a gun while the bodies of two females are on the ground.

Raymond Michael Weber was arrested on Saturday in Vacaville, California, after allegedly killing the two individuals, according to Fox News. The Vacaville Police Department has yet to identify the victims. However, one of the victims was reportedly a 15-year-old girl, while the other was Weber’s 27-year-old fiancée. The two reportedly got engaged a week before her killing. Enyaw Taylor-Theberge told KOVR-TV that the 27-year-old victim is her daughter, Savannah Theberge, who is a mother to a 4-year-old son.

Weber allegedly live-streamed himself for 36 minutes after the killings on Instagram, according to KOVR-TV and FOX40. Stewart Mixon, a neighbor who reportedly saw the footage, told FOX40 that Weber was allegedly “messing with two dead bodies” and saying that they “set me up.”

“It’s graphic and disturbing. It made me sick to my stomach for sure,” Mixon told the outlet.

“The video showed the man carrying a handgun and two women lying on the floor—not moving,” the VPD said on Facebook.

Solano NewsNet, which reviewed the video, reported that Weber accused his brother, who is a local rapper, and another person of trying to have him killed. “They tried to set me up. [He] tried to have me killed,” he reportedly said during the stream.

A woman who was watching the stream alerted authorities, and an hours-long standoff ensued, ultimately ending with police tasing Weber and taking him into custody. During the standoff, Weber reportedly told his audience, “The police are going to come in, and I’m going to get them. This is the last time you all will see me.”

Weber was charged with two counts of murder and is being held at the Solano County Jail, the VPD announced. He was reportedly wanted for multiple felonies before the incident.