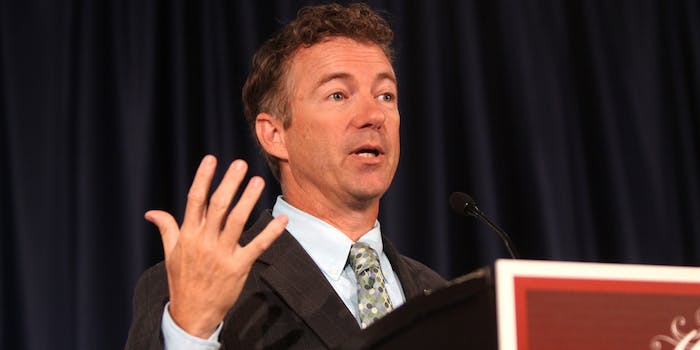 A quick and easy guide to proper citation—for Rand Paul and everyone else.

Last week, MSNBC host Rachel Maddow revealed that a large piece of one of Sen. Rand Paul’s speeches was, word-for-word, copied from the Wikipedia page for the 1997 sci-fi film Gattaca. Soon, more reports of alleged plagiarism began rolling in.

BuzzFeed uncovered that Paul appeared to have reproduced a section from the Wikipedia article on the movie Stand and Deliver in a June 2013 speech. (The speech is now cited on his website.)

Even worse, three pages, or 1,318 words, of Paul’s 2013 book Government Bullies is copied from a 2003 case study from the Heritage Foundation. And several sentences looked similar to a report by a senior fellow at the Cato Institute.

Paul did include links to the studies in the footnotes, but made no mention that the words were nearly verbatim.

These very basic examples of plagiarism, which would be recognizable to the average middle school student, at first stumped the senator.

“It’s a disagreement over how you footnote things, and I think people footnote things different in an academic paper than they do in a public speech, but if we were going to present any of these speeches for publication they’d have footnotes in,” Paul said Wednesday on America with Jorge Ramos.

The confusion over academic footnotes versus verbal attribution soon turned to blaming “hacks and haters” for waging a politically motivated attack against the politician.

And Sunday, the Kentucky lawmaker said the accusations made him wish dueling were legal. But as entertaining as a Paul-Maddow duel would be, maybe we can offer a few tips on how to avoid future plagiarism allegations.

For Paul, there is a clear misunderstanding between verbal speeches and written documents. He claimed in the Jorge Ramos interview that the issues brought up was with his use of footnotes in his speech that used parts of the Gattaca Wikipedia page.

“We borrowed the plotlines from Gattaca. It is a movie, and I gave credit to the people who wrote the movie…I think they are arguing about whether things are properly footnoted,” he said.

As Maddow pointed out, the accusations of plagiarism have nothing to do with the movie plot.

You did not borrow plot lines from these movies; you read the Wikipedia page out loud. The point is that you seem to have a frequent habit of plagiarizing parts of your speeches, and perhaps that is explained by the fact that you do not understand what plagiarism means. … Senator, someone else’s published words ended up in your speech without attribution. How did that happen? Do you understand that that is a problem?

The real issue is Paul reading word-for-word from Wikipedia and not mentioning that the information is coming from the website. The College of Southern Nevada has a great resource that gives examples of oral citations. And it really isn’t that complicated.

The basic rule is to cite the author, title, and date of a publication you are using in a speech when paraphrasing. If the speaker is verbatim reciting a part of a text, you should make it clear that you are quoting exactly—something Paul did not do.

There are also tons of YouTube videos put together by academics to help struggling college students (and clueless lawmakers). The video below by YouTuber John Fisher gives a brief overview for how to effectively cite sources in a speech.

The Heritage Foundation told BuzzFeed it didn’t mind that Sen. Paul copied its study verbatim for his book. But in an academic setting, this type of plagiarism can have serious consequences. Professors have lost tenure, students have been expelled from universities, journalists have lost jobs, and politicians have been hounded throughout their careers.

While Paul does include a link in the citation section of the book, three whole pages have text that is nearly identical to the study’s. When writing a book or academic paper and quoting a study verbatim, the text should be surrounded by quotation marks to ensure that the audience understands the words are not the author’s.

This is not done in Paul’s book, which would lead a reasonable person to believe that the words came from Paul’s mind.

To help with citations, there are numerous online resources that can help with all of the common styles—MLA, APA, and Chicago. Noodlebib.com has an online form where users can input information and create adequate citations for all kinds of media, including books, magazines, movies, and even Wikipedia. It literally makes the citations for you.

There are also online plagiarism checkers that scan a completed speech for potential instances of plagiarism. After checking out some of them, the most effective seems to be plagiarism-detect.com, which provides the chance the copied text is plagiarized from another Web source.

It picked up the first several paragraphs of the Gattaca Wikipedia page when entered into the system and flagged potential plagiarism.

With the numerous online resources available and renewed media focus on plagiarism, maybe some of these Ivy League–educated politicians can figure out how to properly cite their sources.

If not, there may be a lot more duels happening in D.C.

Update: Paul has been fired as a columnist by the conservative Washington Times after owning up to plagiarism in one of his columns.