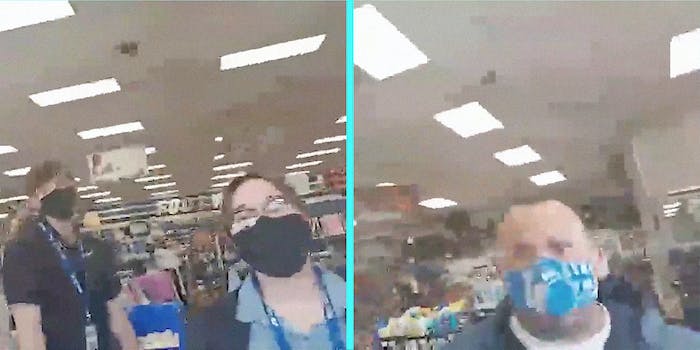 ‘We have kids in here’: Racist live-streamer thrown out of sporting goods store, arrested after N-word rant

A racist live-streamer was thrown out of a sporting good store and arrested after verbally accosting everyone in the checkout area.

The video, posted this week to YouTube channel Livestream Rewind, shows an unmasked racist live-streamer in an altercation in a Big 5 sporting goods store. The stream itself is most fuzzy while in the store. (A short clip of the video was also posted to Reddit’s r/PublicFreakout page.)

From the start, he’s telling everyone who will listen to “Shut the fuck up.” However, the racist live-streamer ramps it up a notch by calling one of the employees a “pussy-ass bitch, n****r.” Mind you, no one in any frame is Black; he’s decided the slur applies to everyone.

“We have kids in here,” says a semi-scrambled woman at a clothes rack.

An agitated man walks briskly toward the streamer while telling him to leave the Big 5 store.

“Don’t touch me; I’m drunk,” he says, just before he’s pushed away and out of the store. The camera goes down for a minute while a struggle is heard off-screen. The live-streamer’s girlfriend can also be heard yelling.

An employee picks up the camera, looking into it: “You guys are following a fucking loser.”

Once outside the Big 5 store, the racist live-streamer continues to abuse patrons and employees verbally. He perks up upon hearing the police sirens are getting closer to the store. The girlfriend is recording his reactions, which suggests that he knows he’s going to be arrested. In fact, it appears the entire ordeal was a gag for clout.

The racist live-streamer even asks his accomplice, “Are you ready?” Then, he semi-charges one of the men just as the police arrive, calling the bystander racist and homophobic slurs.

The police tell the racist live-streamer and his accomplice to get on the ground, where they are arrested.