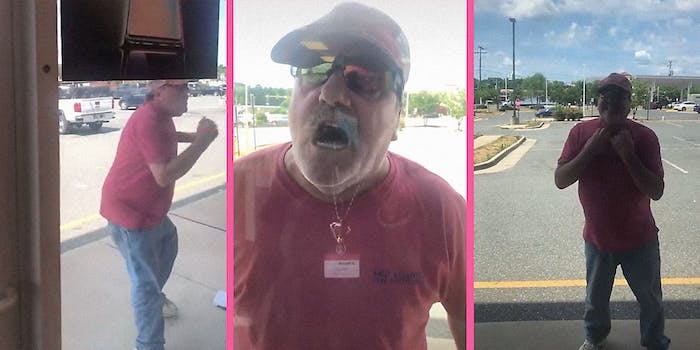 The video went viral this week via TikTok. But that's not the whole story.

In a viral set of TikTok videos, a so-called male “Karen” rages out, kicking locked doors after being denied service at a Verizon phone store in Stafford County, Virginia. But not so fast: It’s an incident from July that ultimately resulted in racist abuse and an arrest.

Posted by @ghettogaragebuilds this week, the viral videos start with the male Karen already locked out of the store.

The Verizon employee is on the phone with his superiors, saying he has already called the police, as he demands to have his “shit fixed, man.”

The angry male Karen, a viral archetype also known online as a “Ken,” has already thrown his phone at the window and threatens to rip off his shirt. Wearing a “Mid-Atlantic Fire Protection” shirt, however, Ken ultimately decides to keeps his shirt on.

In the second video, which has over 1.7 million views, he comes back with a vengeance. The angry Ken runs full-speed into the double doors, then tries kicking out the door with his heels.

The violent Ken yells more and then grins into the cameraphone, telling the employees, “Fuck you!”

In the last video, the angry Ken is shown with a calm and collected Stafford County deputy. The notion that he could violently bang doors and windows without any consequence bothered the poster and many commenters.

The overlay says, “Welcome to America, where you act like an animal, then have a nice talk with the police. White is right. If he was brown, he would’ve been down.”

But that’s not quite right. According to TMZ, the man was eventually arrested for disorderly conduct here, back in July. And according to TMZ’s original, full version of the video, Ken calls a Verizon rep the N-word during his violent outburst.