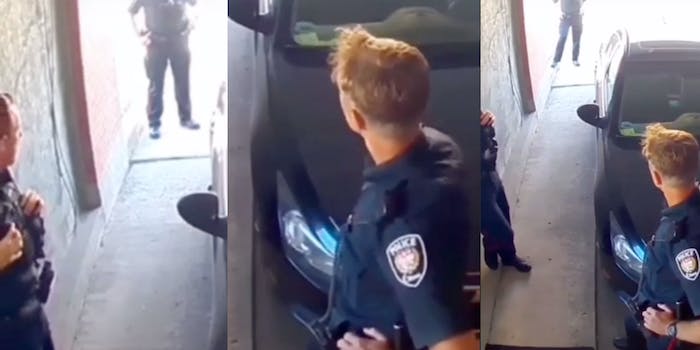 'The population of North America, we're the minority I think, even at this point.'

Three white police officers from the Ottawa Police Service were caught on camera complaining that the “white man’s day is done” while waiting outside a man’s home.

The video, shared on TikTok by Andrew Younis (@ttvbigdiscoenergy), has racked up more than 34,000 views and hundreds of comments since it was posted yesterday. The video, which is a repost from Younis’ friend, is captioned, “Racist police pulled up to my Black friend’s house to harass him. They didn’t know they were recorded.”

The three officers are all partially obscured in the video, which appears to be taken from a home security camera. They do not appear to realize they are being recorded.

The cops have clearly been standing outside the door for a while before the video begins. They are mid-conversation at the start of the video, with one officer lamenting, “Our days are done, white man’s day is done.”

“I think he’s onto something,” another officer says.

“The population of North America, we’re the minority I think, even at this point,” one officer says. Another cop agrees and says that “if you put all the ‘different groups’ together,” North America would be majority non-white. (This is not true. According to Visual Capitalist, the U.S. population was 60.1% white as of 2019, while people of color only comprised 22.3% of Canada’s population in 2016, according to non-profit organization Catalyst.)

The cops briefly discuss Toronto’s racial demographics, with one noting, “Every couple you see walking by is a mixed couple.”

“I told my son he can find a Chinese or an Asian girl if he wants to stay in the mix,” one cop says. “Get your foot in the door.”

Plenty of viewers agreed that the cops’ discussion was racist, but many commenters defended them and said they were simply expressing “facts and opinions, not racism.”

“That just sounds like a normal conversation to me,” one user wrote. “They didn’t say anything degrading towards any of those races.”

In a follow-up video uploaded hours later, Younis asked viewers to back off.

“I reposted a friend’s post who had recorded Ottawa police officers having a less than appropriate conversation on his front door step,” Younis wrote in a caption overlaying the video. “I know as much about this as you do.”

Younis also said he’s received “messages of discrimination” regarding his Middle Eastern heritage because of the post. (The Daily Dot could not immediately reach Younis for comment.)

In a statement to CBC News, a spokesperson for the Ottawa Police Service said the department has launched “an active professional standards unit investigation regarding” the video.

“Regardless of the intent, the comments expressed in the video have negatively impacted community members and service members,” the statement continues. “The comments are offensive and they have further eroded public trust as well as internal morale.”