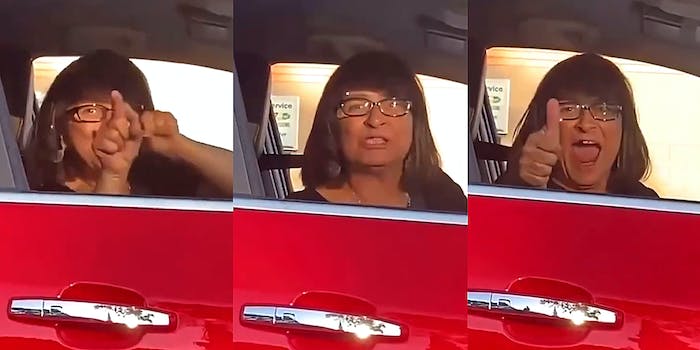 'Before the Blacks were slaves, the Irish were.' No, ma'am, they were not.

A Reddit video shows a racist “dancing Karen” gyrating in her car while saying the N-word, and then saying “white lives matter.”

The video starts with a racist not minding her own business. She chants the N-word, with finger guns, as if she was shooting them toward the Black man in the car.

Then, this “dancing Karen” yells, “white lives matter, white lives matter too” toward the couple. Not for nothing, she explains, incorrectly, that “before the Blacks were slaves, the Irish were, so get behind [us].”

Then she speeds off, with the couple verbally running down her license plate. The video is allegedly from an intersection in Richton Park, Illinois; however, nothing identifies the time and location of the event explicitly. The video showed up online on Wednesday, which would suggest it was recently filmed.

Aside from the blatant and ugly racism, the “dancing Karen” spouted off a violent, factually ahistorical notion that’s been allowed to cook for ages in an attempt to minimize the past and ongoing plight of Black people in America. The white nationalist-created idea is a severe conflation of Irish people’s indentured servitude (and penal transport) during the 17th and 18th centuries, with the gross practice of chattel slavery on Africans.

During the 17th century, tens of thousands of British and Irish indentured servants migrated to British America, with the majority working a set number of years to pay their way across the Atlantic. However, at least 10,000 were transported as a punishment of various crimes, including rebellion against English rule in Ireland.

Simply put, the Irish were never slaves in the Americas, and there no history to support this idea. Various other myths have been used to support the pseudohistory, all debunked in time—but not before Facebook got a hold of the inaccuracies.

Other redditors are aware of history. As u/Dr-Satan-PhD commented: “Many Irish, along with other Europeans, signed up for indentured servitude in the colonies because it was better than their poverty-stricken homelands. It was not forced, and it was not chattel slavery. They were treated much better than African chattel slaves since they were considered fully human, and could eventually buy their way out of servitude, a luxury the Africans didn’t have.”