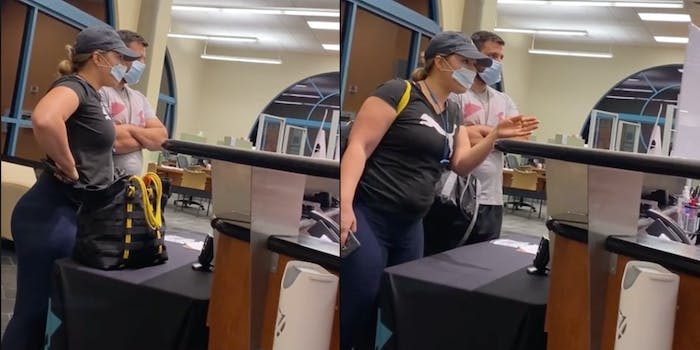 'Normalize standing up for employees who are just doing their job.'

Occasionally, heroes prefer athletic pants and sneakers. One such knight recently stepped up to defend the front desk employees at their local gym from an irate Karen and her partner.

The initial altercation appears to have been prompted by the gym’s mask-wearing requirement. A video of the incident was shared on TikTok and later Reddit, where it shot to the top of the site’s PublicFreakout subreddit. Karen, wearing her mask like a maxi pad, is seen berating an employee as the video begins. Her beau—we’ll call him Ken—stands by her side, face mask properly secured, as the front desk employee tries to explain the gym’s mask policy. In a reveal that will shock no one—except, apparently, Karen and Ken—the gym is requiring masks due to broad mandates requiring face coverings in public settings.

More and more gyms have begun requiring masks even while working out. Fitness creates a lot of respiratory discharge, which could turn gyms into a hotbed of COVID-19 infection. In an effort to avoid this and keep their doors open, many gyms have shifted their policies to require masks at all times. We are in a pandemic, after all. Adjustments must be made.

This fact appears to be lost on Karen, who instructs the employee to “focus on what’s on your face, and focus on what’s in front of you.” When the employee attempts to respond, Karen rudely turns away to address a different employee. The second employee proceeds to lay out the same set of rules as the first. He notes that the state mandate requires the gym to maintain their mask policy.

Ken finally pipes up at this point in the video, inserting that “it doesn’t say anything about a gym.” That’s when “Maxi Pad Mask Karen” cuts in, backing her boyfriend’s statement that they should be allowed to work out how they please.

Finally, gloriously, our unseen hero emerges. A silent bystander until this point, a woman in a teal shirt and baseball cap steps forward. “Okay I’m just going to interrupt because this is really annoying,” she interjects. “You guys need to just follow the rules, I work for an attorney.” When Maxi Pad Mask Karen attempts to silence her, the anti-Karen merely talks louder.

She calls the couple out for being disrespectful, and notes that it appears the employees would like them to leave. Maxi Pad Mask Karen repeatedly tells her to “mind your own business,” but the anti-Karen is not deterred. “They’re telling you, its state law. Its country wide,” she says over Karen’s repeated demands that she shut her “fucking mouth.”

The video concludes after this final, noble statement. In the comment section to the TikTok, the original poster noted that our hero in teal is her sister. A video posted on her sister’s TikTok gives further details into the incident.

“She was calling the employee a dumb bitch and other inappropriate names before the video started,” creator Laura Ames explains. She also notes that maxi pad mask Karen was initially wearing her face covering like a fake mustache, only beginning to cover her mouth and nose after being told a mask is required.

Anti-Karen just may be the bitch we all need right now.