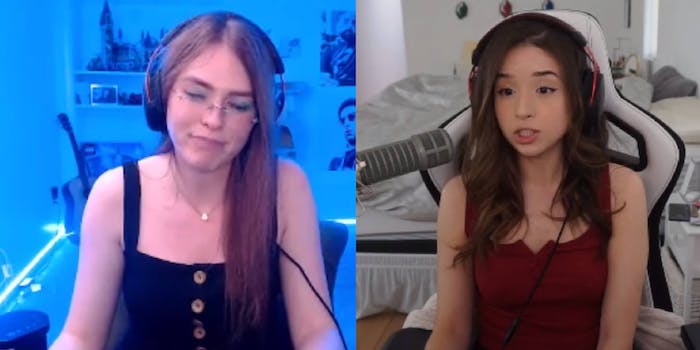 'I don't think that's appropriate for a female that represents the majority of females on Twitch.'

The World Cup, which was hosted on a Korean website, pits two streamers against one another. The user compares the streamers and votes on one, gradually eliminating others until a single internet personality remains.

A slew of streamers on Twitch have been taking part in the competition, often broadcasting their participation for viewers to enjoy. Pokimane was one such streamer, but fellow female gamer QTCinderella took issue with her approach to the game.

“I do wanna say, that whole World Cup thing: very toxic,” QT said on-stream during a Monday broadcast. “I did think that Pokimane wouldn’t’ve made it toxic, but she… she kinda added to it.”

“The appropriate way to do that, as a female, to support other females on the, you know, on the platform, would be to look through it and say ‘oh I like this girl’s content,’ or ‘this girl is really funny,’ or ‘I’m friends with this girl—I’m going to choose her.’ But there were multiple times where Pokimane said ‘I’m purely doing this based off of looks, and this girl is prettier,'” the League of Legends streamer continued.

“I don’t think that’s appropriate for a female that represents the majority of females on Twitch. So just throwing that out there. Kind of a bummer. Big yikes from me.”

As she was broadcasting her version of the rating game, Pokimane even stumbled across QT as an option. She made it through the first round of Pokimane’s game but was ultimately eliminated. “If I was a guy, I would want to date her,” Pokimane said of QT. “Because it would be interesting. Because I know it would just be like passionate but crazy, but wacky but like, a good time.

“Maybe I’ll die afterwards, but it would be a fun time either way,” she continued. “And I think she has, like, a really really sweet, genuine side to her.” Though QT won out, Pokimane noted that her opponent, KaleiRenay, was “really really attractive.” Unfortunately, Pokimane didn’t approve of the content she posts on her Twitter page, so she was eliminated.

Pokimane has yet to comment on QTCinderella’s criticism of her. Given the drama many celebs are whipping up with all this self-isolation downtime, however, it may only be a matter of time.