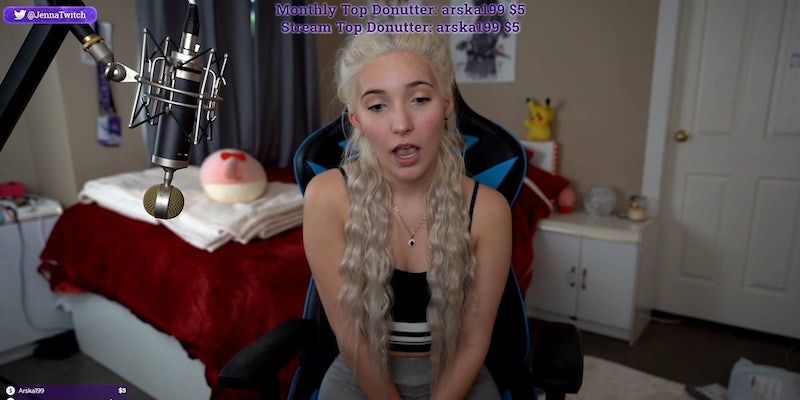 A few weeks after Twitch streamer Jenna’s old racist and homophobic Discord chat logs were discovered, she’s still suffering major consequences on the streaming platform. Now, she’s thinking about leaving Twitch for good, because her streaming career has been so badly harmed.

“I don’t have a choice,” she said during a live stream on Sunday.

Last month, a number of her old Discord chat logs were revealed, spanning the years from 2016-2019, and they showed her writing homophobic slurs, using racist language, and penning “Fuck Jews.”

When those logs were leaked, she immediately apologized—she said, “I feel terrible, I’m a fuck up. But I already knew I was a fuck up so I’m shitty.” But the damage was done. She lost her Twitch partnership, meaning she lost a large chunk of revenue, and during her latest stream, she also worried about being shadowbanned by Twitch, which basically means she wouldn’t show up in the site’s search results if somebody typed in her name.

As of Monday morning, though, if you searched for “Jenna” on Twitch, her account was the first to pop up.

Still, somebody in her Twitch chat said he couldn’t find the “subscribe” button on her channel, while another told her to stop apologizing, that “you owe nothing to anyone now,” and that “this is about moving forward [and] not looking back.”

Others said she had disappeared from their list of streamers they follow and another wrote, “you can only find your name by direct link.”

“Oh my God,” Jenna, who has about 263,000 Twitch followers, said in response. “Well, I’m going to have to switch platforms then. There’s literally nothing I can do.”

She also said her viewpoints on others have changed.

“I don’t know why everyone is saying last month that I did all this racist, horrible shit,” Jenna said. “I haven’t said anything racist or homophobic in the last year.”

When she discovered last week that Twitch had unpartnered with her, she tweeted that “I’m happy they are standing against hate. It brings me joy I am in a community that will protect the oppressed.”