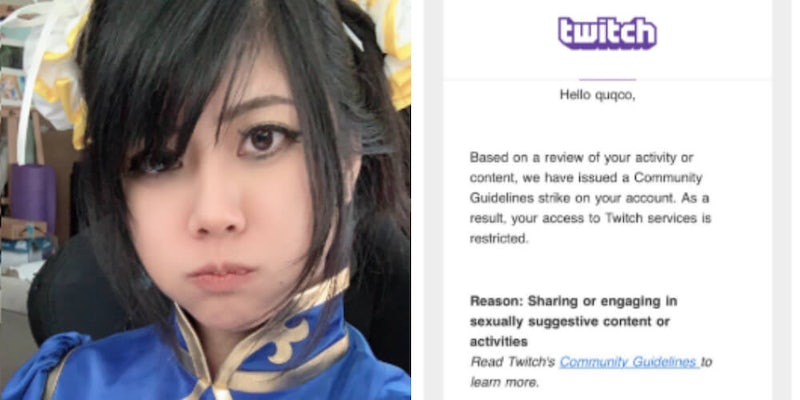 The platform deemed it 'sexually suggestive.'

Twitch suspended a streamer on Sunday night after she cosplayed Chun-Li from Street Fighter.

Streamer Quqco is an art-streamer who likes to draw illustrations from her favorite gaming franchises during broadcasts. On Thursday, she received an email from Twitch notifying her that she was suspended from the platform for three days.

I just got banned again for wearing a Chun Li cosplay. I am fully covered. I don’t understand @TwitchSupport @twitch how is this sexually suggestive content? pic.twitter.com/qP1WoBbZL3

According to the email that Quqco shared on Twitter, she was temporarily banned due to “sexually suggestive content or activities.” She also shared a photo of the Chun-Li outfit, which was a blue qipao complete with bun covers in her hair. Quqco questioned how exactly her cosplay could be deemed as sexually suggestive.

Unfortunately for Quqco, this is not her first run-in with Twitch. She was previously suspended after cosplaying Mai Shiranui from The King of Fighters. Quqco noted that she doesn’t participate in any physical activities, such as twerking, during her live streams.

According to Quqco, her recent suspensions might have been a result of a report brigade by users of the “Livestreamfail” subreddit. In an email to the Daily Dot, Quqco stated that harassment from the subreddit has spilled onto her Twitch.

“Twitch has often ruled on the side of those who mass-report female streamers as ‘sexually suggestive content’ and have failed to protect their female streamers from harassment,” Quqco wrote in an email to the Daily Dot.

Twitch isn’t new to criticism either. Many users have criticized the platform for turning a blind eye to the female streamers who receive harassment, use of racial slurs, and animal abuse. Meanwhile, some accounts are suspended for really nonsensical reasons.

a streamer: *throws a cat*

Quqco hopes that Twitch will become a more reliable platform in the future.

“I really hope that Twitch will consider its streamers and protect us from things like ill-intended trolls out to ruin streamers’ livelihood,” Quqco said.