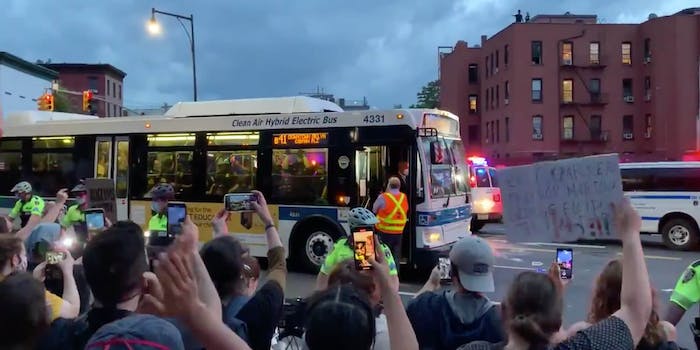 Protesters cheer as the bus driver walks off the bus and refuses to drive it.

New York City bus system employees are refusing to transfer protesters arrested during demonstrations against police brutality after the death of George Floyd.

Floyd, a Black man killed Monday in Minneapolis police custody, cried out for help as a white police officer pinned him to the ground in a now-viral video with a knee to his neck. His death has sparked protests nationwide, especially throughout Friday and the upcoming weekend.

On Friday, a video of a bus driver refusing to transfer arrested protesters in front of Brooklyn’s Barclay Center went viral.

“The NYPD is using a bus to transfer arrested protesters at the Barclays Center,” wrote Twitter user @berniebromanny. “However the bus driver refused to drive it.”

In the video, a crowd cheers loudly after a bus driver appears to refuse to sit behind the wheel. According to Pix 11, Gresko’s video received more than 1 million views within an hour.

The Transport Workers Union tweeted support for the drivers involved.

“Bus Operators do not work for the NYPD,” the account wrote. “We transport the working families of NYC, all TWU Operators should refuse to transport arrested protesters.”

Motherboard confirmed this to be the official position of the union MTA bus drivers.

“None of our bus ops should be used for that,” said JP Patafio, vice president of Transit Workers Union Local 100, which represents the city’s bus drivers, when asked if the union would transport people who were arrested.

“I told MTA our ops wont be used to drive cops around,” he added. “It is in solidarity” with Minneapolis’ bus drivers. Bus drivers in Minneapolis have similarly refused to transport protesters for the cops.