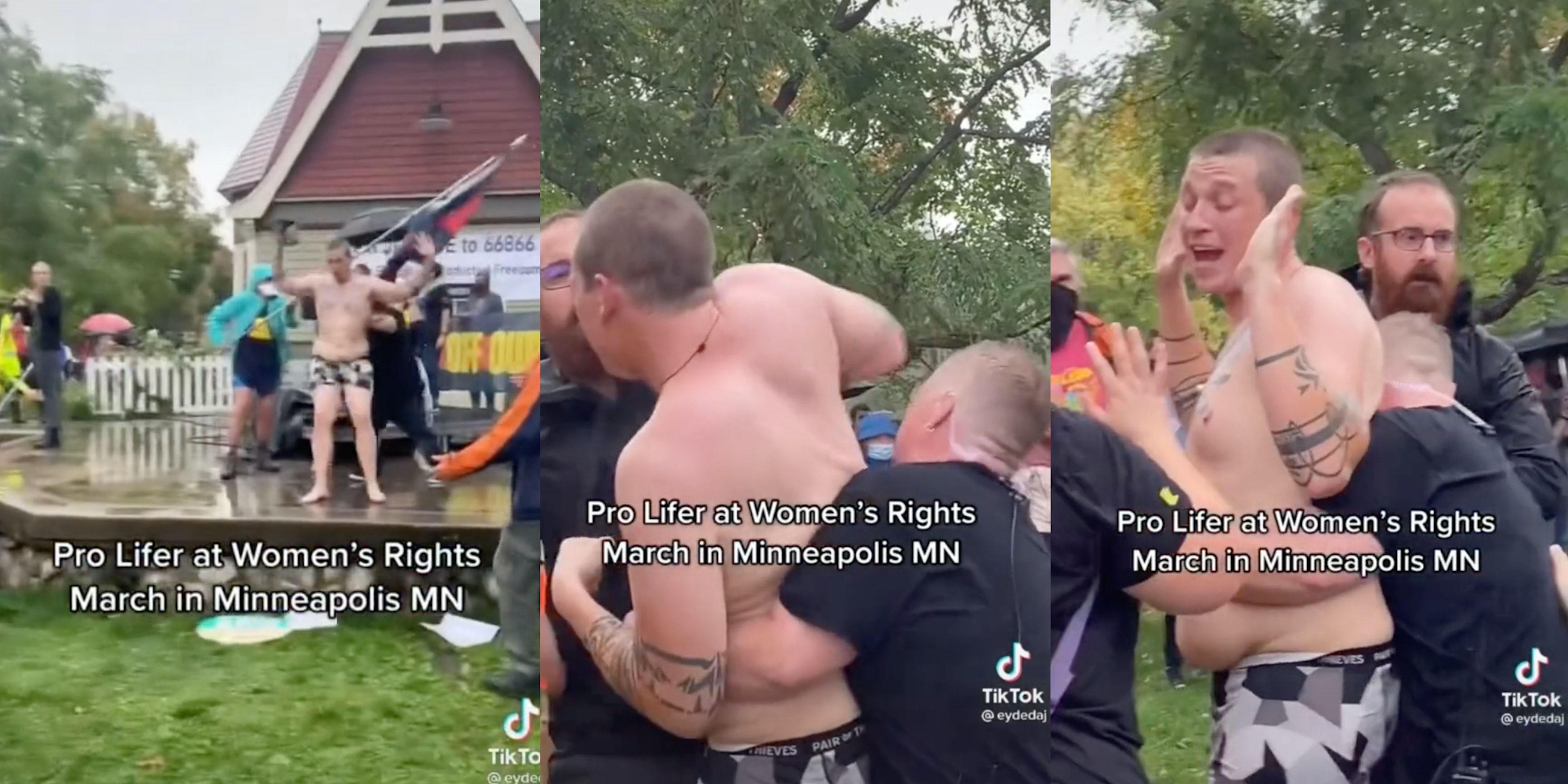 ‘These men out here using their personalities as birth control’: Pro-life troll disrupts women’s march by streaking in boxers

In response, he started a GoFundMe.

A nearly nude protester attempted to interrupt Minneapolis’ Women’s March on Saturday. A witness claims he held up a pro-life sign, and he mocked pro-choice slogans during his disruption. But his online profiles raise questions about what, exactly, he was protesting.

The march was aimed at protecting women’s rights and protesting restrictive laws like the one that took effect in Texas on Sept. 1. The law essentially bans abortions throughout the sprawling state of Texas by disallowing abortions as early as six weeks into a pregnancy. The vast majority of women do not realize they are pregnant at six weeks, and the law makes no exceptions for instances of incest or rape.

The new Texas law has sparked outrage across the country and spurred numerous protests and marches over the weekend. In Minneapolis, thousands of advocates for women’s rights gathered in an attempt to stop broad bans like the one in Texas from spreading to other states.

It was going strong at Loring Park when a protester arrived to try and derail the proceedings. His attempted disruption has since gone viral, thanks in large part to TikToker @auntkaren0, a popular TikToker known for tracking down and calling out people who express racist viewpoints. She shared a clip of the man’s nearly nude protest in a video that has been collecting views and reactions since it went up less than 24 hours ago. Despite its short lifespan, the video is already immensely popular, with more than 75,000 views and thousands of likes and comments.

The video begins with Aunt Karen introducing the man as TikToker @puppy_kult, who identifies himself on his TikTok profile as a “fearless leader” as well as a “social justice worker, mental health expert,” and “director.” She then cuts to a clip of the march, in which the protester, mostly nude, can be seen attempting to shove his way through the crowd in nothing but clinging boxer briefs and an animal print cap.

Numerous attendees attempt to block the man on his way toward the stage, but he forces his way past them. Smirking all the while, the man—who goes by Sean Paul Garrett on Facebook—manages to reach the stage, where he flees from numerous attempts to remove him from the area. He even manages to get ahold of the mic at one point, proclaiming that he is “here to support your rights,” before organizers manage to get the mic away from him.

Things then become violent as organizers attempt to haul Garrett away from the stage. As two men get ahold of, and begin removing, Garrett, he can be seen lashing out and striking one of them in the face. More attendees of the march swarm around the still mostly nude man, and one can be seen spraying him with what appears to be pepper spray. One man, dressed in a black shirt, keeps a firm grip on Garrett from behind as the larger man thrusts his hands victoriously into the air.

In the background, one of the event’s main organizers can be heard attempting to calm the crowd. She notes her hope that “that person finds what they need, and some peace” as a bearded man attempts to speak with Garrett, who responds by shaking his head and delivering a vicious elbow into the head of the man holding him from behind.

The video concludes with another note from Aunt Karen, in which she claims Garrett was arrested. She also claims that seventeen of the people seen at the rally are pursuing charges against him.

“These men out here using their personalities as birth control,” someone commented on it.

Several other videos posted to user @eydedaj’s TikTok page show the progression of Garrett’s protest. In the first several videos, he can be seen clashing with rally attendees fully clothed, before ultimately deciding to strip his clothes off in the midst of the crowd. He can be heard saying, in one of the clips with audio, that he has a right to be nude, attempting to use the slogan “my body, my choice” to his advantage. He also equates it to wearing a bikini. @eyededaj, who goes by Jade on their page, also shared a shot of their legal paperwork after filing charges against Garrett.

She says, in the comments on one of her videos, that he “showed up with a pro-life sign and was calling us murderers.” She also said she believes he “tried to switch things up to try and get himself out of trouble he caused.”

Other clips shared to the account also see Garrett threatening a rally attendee, and ultimately being led away by police.

Garrett took to his own TikTok account in the days after his attempted protest went viral. Several of his TikToks indirectly address the drama, as do a few posts to his Facebook page. In one video, he asks viewers if anyone saw “what just happened to me,” before claiming that “It’s a miracle I’m fucking alive.” Responses to the video are not kind, with numerous commenters calling Garrett an “embarrassment” and urging him to “get help.”

On Facebook, Garrett similarly addressed his mostly nude protest in an indirect manner. He posted a similar sentiment to that on his TikTok, asking his friends and followers “What… the actual… FUCK… just happened to me” in a straightforward post. He also attempted to share a TikTok clip that has since been removed for showing “violent and graphic content.”

Garrett also shared a GoFundMe to his Facebook page, where he is asking for $10,000 to help him “get a lawyer to defend my rights.” In the description, he outlines a very different version of events than what the video shows. He claims that he was “assaulted, beaten, intimidated, forced to strip, maced, and dragged out on charges of ‘police assault.'” He also claimed that he “showed up to voice my support for a cause I really believe in, and I think that the crowd turned on me because they assumed that I was a Trump supporter… right wing… pro-life. All of which are VERY untrue.”

The GoFundMe has not received any donations around 19 hours after going live.

The Daily Dot reached out to Aunt Karen, Garrett, and Minneapolis police.

Update 12:27pm CT, Oct. 6: Aunt Karen tells the Daily Dot: “The video was sent to me anonymously. I wanted to share it and get the story out as soon as possible. I believe that the person who sent it to me attended the rally. I haven’t heard from any of the attendees. I’m glad that someone felt comfortable enough to send me the video and to know that I would spread the message.”

Update 1:52pm CT, Oct. 13: Garret, in an interview with the Daily Dot, claims the crowd turned on him after he attempted to disrupt Sen. Amy Klobuchar (D-Minn.) as she discussed eliminating the filibuster onstage. Soon after this, he claims the crowd “assaulted” him and “forced” him to “strip.” When pressed about this claim, he said he took his shirt off willingly, but only removed his pants at the urging of a male protester, because he “didn’t want to intimidate the crowd.”

Garret also said he intends to file his own lawsuits against some of the protesters he clashed with, along with police and the hospital he was admitted to. He said his primary hope is that he can resume “business as usual,” but with upward of five lawsuits pending against him, “business as usual” likely won’t be an option.