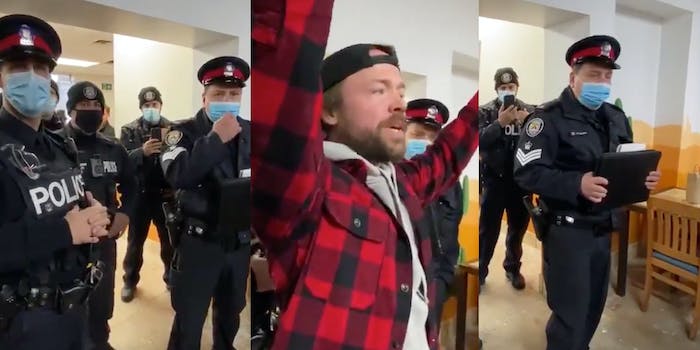 The locks have now been changed on Adamson Barbecue.

As COVID-conscious Americans shake their heads in dismay at the millions of people traveling for Thanksgiving despite the CDC’s warnings, they can take solace in the fact that publicly flouting coronavirus restrictions is not a uniquely American phenomenon.

A Canadian barbecue restaurant made that clear this week when it got shut down by police for violating local lockdown orders—two days in a row.

Police on Wednesday laid charges against Adam Skelly, owner of Adamson Barbecue, a restaurant in the Etobicoke district of Toronto, CBC News reports. Skelly was charged with breaking public health orders on Tuesday and Wednesday by allowing in-person dining at his Canadian barbecue joint, defying a provincial lockdown order.

A video of Toronto police shutting down Adamson Barbecue has gone viral on Reddit, earning more than 10,000 upvotes on r/publicfreakout.

“Everyone, I just want to bring your attention to the fact that the restaurant is operating against the public health work order that was issued yesterday,” one officer says.

A disgruntled customer also fulfills the stereotype of an entitled public safety defier by yelling back, “I’m wearing a mask!”

Undaunted, the police ask the customers to settle down and continue explaining that Adamson Barbecue is operating unlawfully.

“I’m hoping to deliver the messaging that you are in contravention of these acts. There is potential for charges, and, again, wanted you to be aware of it,” the officer says. “Hopefully, I’d ask that you leave, and otherwise there is a possibility of being charged.”

Skelly then echoes the officers’ requests to vacate the premises and tells them: “I accept what you’re saying, and I approve of your message to my customers today.”

Several Redditors were amused by a customer in the background of the video who began wolfing down his food as police explained that customers would have to clear out.

Skelly reportedly racked up a total of nine charges, including violating indoor dining rules, holding an illegal gathering, and operating a business without a license. As police shut down the Canadian barbecue joint on Wednesday, at least 100 people rallied outside the restaurant to support Skelly and protest lockdown orders.

The third time will not be the charm for Skelly: The Toronto Star reports that the locks have been changed on Adamson Barbecue and there will be a police presence outside the restaurant to ensure it does not reopen today.

Skelly did not immediately respond to the Daily Dot’s request for comment.