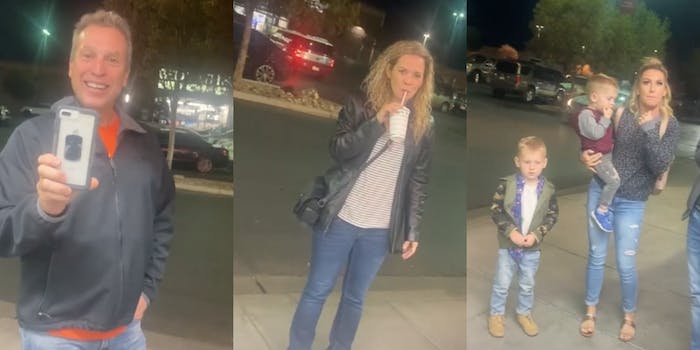 'It is my body, and I have every right to choose.'

A teenage TikToker has gone viral after recording her altercation with not one, not two, but an entire family of anti-mask “Karens.”

Eighteen-year-old TikToker @missbayz (whose first name is Bailey, according to her Twitter) uploaded the video on Sunday night; in 12 hours, it has accumulated nearly 500,000 views. It appears that Bailey confronted the family of Karens outside an In-N-Out Burger and asked them to wear face masks before she began filming. According to Twitter user @davenewworld_2, who also shared the video, the altercation took place in St. George, Utah.

“Yes it is,” she responds. “They can get fined up to $10,000.” (She is likely referring to Utah’s recent statewide mask mandate, which includes fines of up to $10,000 for anybody who organizes public gatherings without requiring masks and social distancing.)

“What about if the workers in there get corona and they can’t work anymore?” Bailey asks. “What about their families?”

“Oh wow, yeah, get the flu,” Papa Karen replies. “They’re gonna get the flu. Look at this girl.”

At that point, another member of the Karen clan—perhaps an older daughter—chimes in, “Look at the survival rate, honey.”

“It’s not about you!” Bailey tells her.

“It is about me because it is my choice,” the second Karen insists. “It is my body, and I have every right to choose.”

“What if someone else dies? You’re making a decision for someone else’s body,” Bailey says. But her argument proves fruitless, as the second Karen tells her, “Don’t punish me for being healthy.”

At this point, Papa Karen reenters the fray. Holding up his phone to record the altercation as well, he says in a mocking tone, “Look, this girl’s all triggered. She’s all triggered, oh my gosh. Oh my goodness.”

Other TikTokers roasted the Karen family for ganging up on a teenager and acting so immaturely.

“‘Look at her she’s all triggered’ ok but who’s crying about not wanting to put thin fabric over their face for 15min to order a burger,” @arteaga.gabriel asked.

“‘it is my choice. it is my body and i have every right to choose’ i guarantee that she’s against abortions even though that’s someone else’s body,” @Dalls commented.

Bailey could not be reached for comment via TikTok or Twitter because her DMs were closed, but she said she would post a “story time” later today breaking down her fateful encounter with the Karen clan.