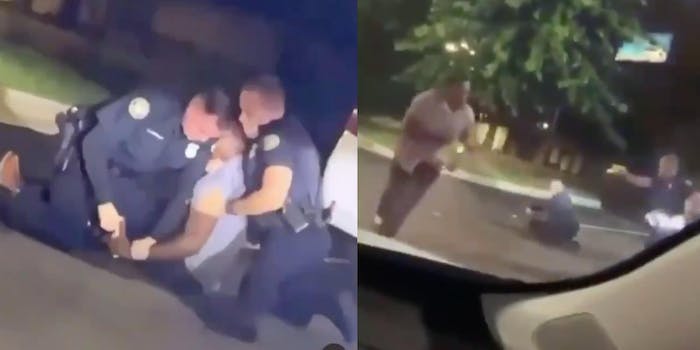 A video shows 27-year-old Rayshard Brooks running away when shots can be heard.

Twenty-seven-year-old Rayshard Brooks, a Black man, was fatally shot by Atlanta police Friday night after they received a complaint he was asleep in a Wendy’s drive-thru.

Brooks was reportedly asleep in his parked car when Atlanta Police Department officers showed up to the scene around 10:30pm. He reportedly wasn’t blocking the window, and customers could still drive around his car to get to it.

According to a now-viral social media video of the incident, a struggle ensued between two officers and Brooks. Brooks resisted arrest, according to a statement from the Georgia Bureau of Investigations (GBI), and one of the officers deployed a taser.

In a video shared to Twitter, Brooks can be seen running away from the officers, and then shots can be heard off-camera. According to TMZ, police shot Brooks three times as he was running away. Brooks later died after receiving surgery at a hospital.

An alleged witness recorded another video that was posted to social media.

“I saw y’all talking to him for 20 minutes,” the person recording says to a nearby officer. “Unarmed. Non-violent. Nothing wrong with how he conducted himself, whatsoever, and you pull a fucking gun dude?”

Protesters later showed up to the scene and began shouting at officers, “no justice, no peace.”

The GBI said via Twitter that it is reviewing the “video posted on social media captured by witnesses in this incident.”

A protest was held at the location on Saturday, where Atlanta City Councilwoman Joyce Sheperd said the officers’ actions didn’t seem justified, according to the Atlanta Journal-Constitution. Stacy Abrams also has called for an investigation and accountability via Twitter.

“Sleeping in a drive-thru must not end in death,” Stacey Abrams wrote.

The incident follows weeks-long protests against police brutality and systematic racism. According to the AJC, this is the 48 Atlanta Police Department police shooting that the GBI has investigated in 2020.