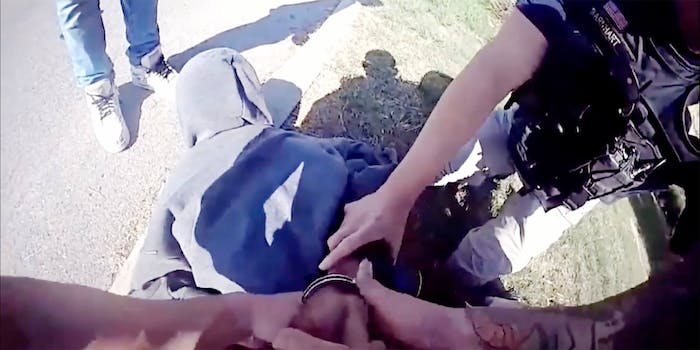 'Why is this officer punching him? He has handcuffs on.'

Footage from Tulsa, Oklahoma shows police handcuffing two Black teenagers and violently wrestling one to the ground after allegedly jaywalking.

The video from the officer’s bodycams appears to show the officer grabbing one of the boys from behind without any warning or attempt to identify himself as a police officer. He then appeared to ask the boy either “what do you want?” or “what are you on?” rather than explaining to him why he’s being stopped.

The boy attempted to break free before the officer and one of his colleagues wrestled him to the ground. The other boy begged the officers to stop. At one point one of the officers said “no one’s choking anyone” in what seems to be a response to the second boy.

When asked why they were handcuffing the boy, one of the officers started by just saying “because.”

“He was jaywalking. All we wanted to do was talk to him, and he had to act the fool like that,” the officer later elaborated.

The officers proceeded to search both of the boys. The cops went on to handcuff the other boy even though he cooperated fully and did not resist. One officer appears to get on top of the first boy as he’s handcuffed on the ground. Meanwhile, the second boy can be heard saying, “Hey he has handcuffs on. What are you doing?” The other officer responds by telling them to “chill out.”

The boy on the ground then started saying “I can’t breathe” in a hoarse, distressed tone. While the second officer says to turn him over, the officer holding him down does not appear to do so. Eventually, the two police officers decide to put him in their patrol car, and the boy began to struggle while voicing concern for his safety. More violent restraint followed, including what appears to be the cops pulling down his pants in order to use them to restrain his legs.

While the second boy kept trying to get the boy to calm down and comply, he also kept asking the police why they were doing this.

“Why is this officer punching him? He has handcuffs on,” the second boy said.

The officers justified their behavior, saying the boys had broken the law by allegedly jaywalking. Toward the end of the video, one officer laughs saying, “I don’t need backup. You’re like 14.”

The video ends as the officers load the boy into a squad car. The police then inform the second boy how to avoid jaywalking in the future and allowed him to leave. At no point was either teen Mirandized or otherwise formally arrested in the footage available.

While the incident is apparently under investigation by the Tulsa police’s Internal Affairs Unit, the teenage boy, who is in fact 13 years old, has been charged with jaywalking, assault and battery of a police officer, and resisting arrest. The latter two charges are felonies.

Tulsa is also home to Police Major Travis Yates, who recently went onto a conservative radio talk show to deny the existence of systemic racism and claimed the research indicated that “we’re shooting African Americans about 24% less than we probably ought to be based on the crimes being committed.”

Tulsa Mayor GT Bynum responded on Facebook to both the detention of the two teenage boys and Yates’ remarks.

“I want every kid in Tulsa to feel safe to walk down the street in their neighborhood. No Tulsa kid should have to fear being tackled and cuffed for walking down the street,” he wrote. “I viewed that footage last night more as a parent than a mayor.”

In the same statement, the mayor voiced support for the Tulsa police chief, adding that he would be working with him to review the behavior of Yates and the officer involved in the children’s arrests. The statement ends with an endorsement of the Tulsa police force as “courageous” and “heroic.”

Meanwhile, the 13-year-old boy’s lawyer is working to have the two felony charges dropped. Jaywalking is a crime punishable by a fine from between $5 and $500 in Tulsa.