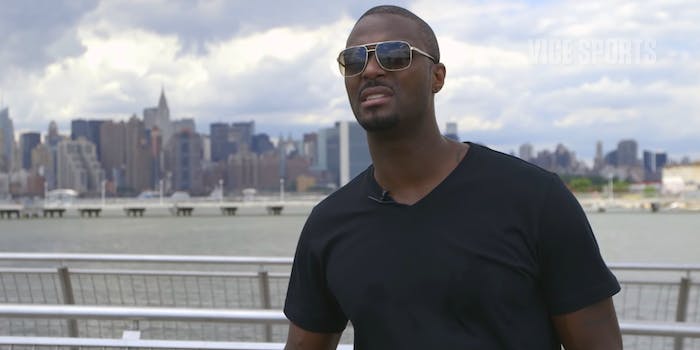 NFL great Plaxico Burress, who once shot himself in a nightclub by accident, joins OnlyFans

Fans would like to see the 'hole in his leg.'

Back in 2008, Burress accidentally shot himself in the thigh in the middle of a New York City nightclub. He’ll likely never live the infamous incident down, as made evident by the replies to his OnlyFans announcement.

“We finna see that gunshot wound lol,” one user commented in response to his tweet announcing his OnlyFans account.

“Bro this [ain’t] the hole ppl go to OnlyFans to see,” another said.

Another said that they would only be purchasing a subscription if Burress shows “the hole in his leg” on it.

OnlyFans is a subscription-based service that lets fans pay a monthly fee to gain access to a creator’s exclusive—and usually NSFW—content. Currently, Burress is charging $15.30 a month for a subscription to his page, but it’s still unclear what kind of content he will be posting.

In 2017, Burress explained what went down the night he shot himself in an open letter published in the Player’s Tribune. “I could barely see and I guess I missed a step and my foot slipped,” he wrote. “My gun came unhooked from my belt and went sliding down my right pant leg. My instant reaction was to catch it before it hit the floor, and I reached down with my right hand to grab it. And I guess my finger hit right on the trigger, because it went off.”

Being that he didn’t have a license to carry, he was sentenced to two years in prison but ended up only served 20 months in jail, according to CBS Sports. He went on to very briefly play for the Pittsburgh Steelers until his retirement in 2012. Now, he’s seemingly taking on a new career path as an OnlyFans content creator.

Most celebrities like Cardi B, The Game, and Rico Nasty use the platform to give fans an inside look at their personal lives or musical talents, such behind-the-scenes footage of their music videos. While other public figures, including Safaree Samuels, Erica Mena, Tana Mongeau, and Blac Chyna, use the platform to make extra cash off of exclusive explicit content.