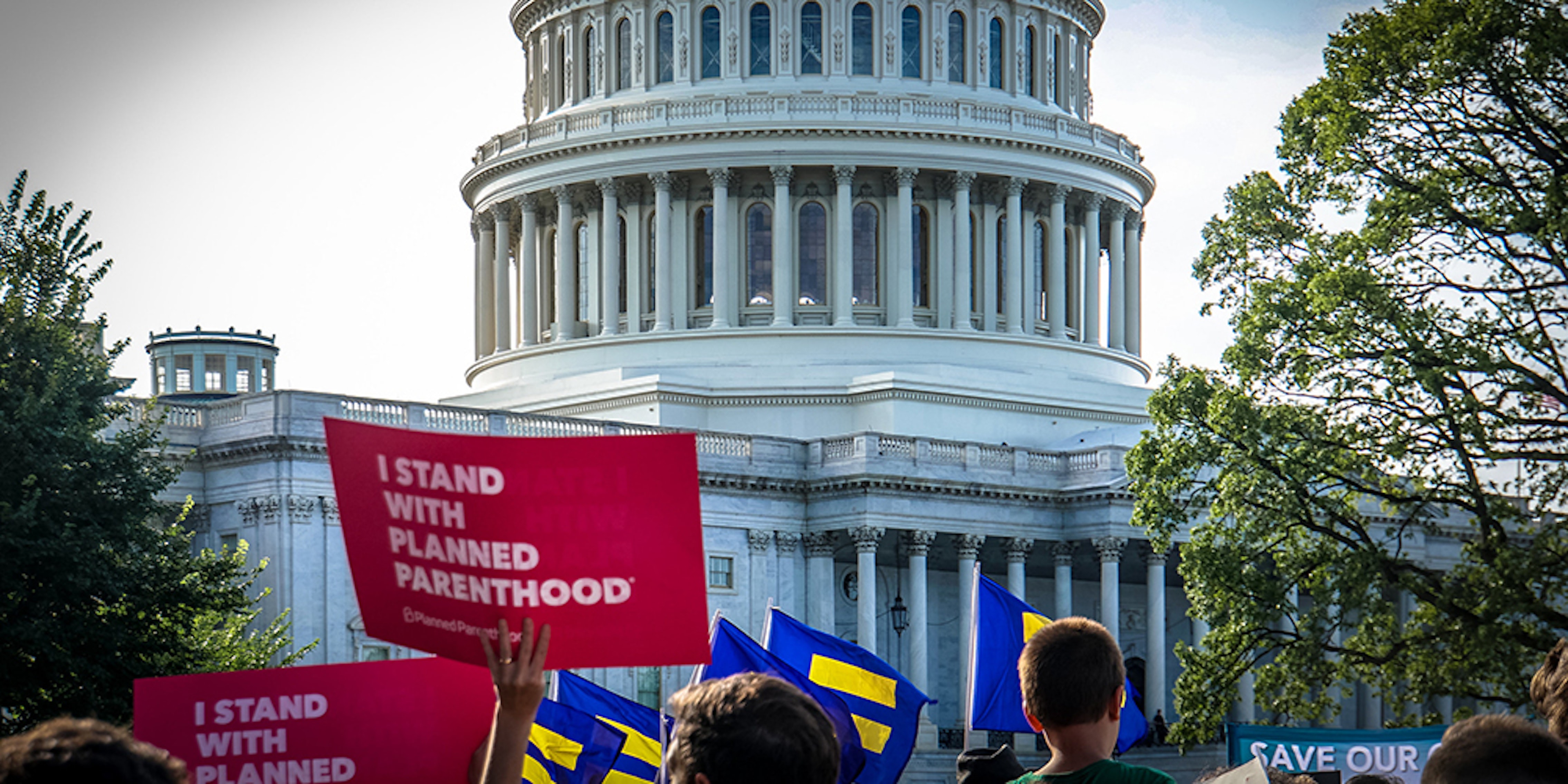 The crushing effects of Trump’s abortion ‘gag rule’ on healthcare

In 2005, she was in her early 20s and working at a prestigious law firm in New York, and she had access to premium healthcare when she went in for a yearly Pap smear. Her OB-GYN had bad news.

“You mostly don’t hear anything after you hear the word ‘cancer,’” Beddoe told the Daily Dot. Not only was her Pap smear abnormal, but she had precancerous cells—the worst kind, CIN 3—that could turn into cervical cancer. Her doctor treated her right away, removing the precancerous cells. Beddoe was told to come back in six months for a follow-up to make sure the cells had not returned.

Six months later, Beddoe, who is Black and an immigrant and moved to the U.S. from the Caribbean at a young age, no longer had that job or health insurance. As a teenager, she was under her mother’s health insurance. In 2005, in the pre-Obamacare days, she was a freelancer with no coverage. Feeling unlucky and scared, Beddoe was left with few options.

“I was thinking, ‘What should I do? What essentials do I have to go without? What do I have to cut so that I can make rent, for healthcare?’” she told the Daily Dot.

She ended up at Planned Parenthood of New York City, where she was treated and given a sliding scale payment option, a relief to anybody without a steady income. Thankfully, the precancerous cells had not returned.

Beddoe continued going to Planned Parenthood even after she had health insurance again because of how friendly the staff was—and how safe she felt.

“I definitely consider Planned Parenthood a resource for giving people access to basic healthcare, it can be lifesaving,” Beddoe told the Daily Dot. “It’s like having an umbrella over you that’s looking out for your health.”

Beddoe is one of the countless people across the country who have spoken out in past months in support of Planned Parenthood amid the Trump administration’s attacks on federal grants, known as Title X, that make family planning clinics’ services available to patients for free or at a low cost. Recent policy will affect low-income Americans, mainly women of color, who will no longer have access to reproductive healthcare at Planned Parenthood and other family planning organizations.

And the fight to fund Planned Parenthood is, of course, integral to an even larger fight for abortion rights, which in recent months has been in contentious battles from the federal to state level. In May, after Alabama’s governor signed the nation’s most restrictive abortion ban into law, women shared their own abortion stories online with the hashtag #YouKnowMe.

1 in 4 women have had an abortion. Many people think they don't know someone who has, but #youknowme. So let's do this: if you are also the 1 in 4, let's share it and start to end the shame. Use #youknowme and share your truth.

I had 2 abortions, both saved my life in different ways.#1 I was too young #2 The doctor said I might die if I carried the baby to full term. I have no regrets or trauma. It was my decision & I won't let anybody take that power away from me or other♀️ #youknowme @MarketRoadFilms

While that hashtag took over social media, the Title X-centered #ProtectX hashtag, started by Planned Parenthood, didn’t garner the same fervor. But it received a huge endorsement on June 21.

Hillary Clinton tweeted using the #ProtectX hashtag, urging activists to “fight back” against Republican politicians who are using the Title X gag rule to come “not just for abortion access, but all reproductive health care.”

While there was no mention of Title X itself during the June 26 Democratic debate, Sen. Elizabeth Warren (D-Mass.), along with other presidential candidates, voiced concerns about the turmoil facing the reproductive health movement.

“I would make certain that every woman has access to the full-range of reproductive health care services and that includes birth control, it includes abortion, it includes everything for a woman,” Warren said.

In stark contrast to the hashtags and rallying cries, recent federal policy has a chilling silencing effect.

The Trump administration’s “domestic gag rule,” which went into effect July 11 after a federal court ruling, makes clinics ineligible to receive funds if they provide abortions or referrals for them. Planned Parenthood, which serves 1.6 million of the 4 million people who rely on Title X, is no longer participating in the Title X program, forgoing an estimated $60 million in annual funding. Planned Parenthood is relying instead on its emergency funding to continue to provide care. The emergency streams of revenue are limited, though.

The gag rule also means that doctors under the program can no longer talk about abortion with pregnant women. Many believe the rule violates every doctor’s commitment to ethical patient care.

“There’s no other example in medicine where a politician is able to interfere with a conversation that a woman has with her doctor,” Dr. Stacy De-Lin, a physician and abortion provider at Planned Parenthood, told the Daily Dot at the health center in Manhattan.

Stripping critical Title X funding is detrimental to women across the U.S. in nearly 4,000 facilities nationwide who rely on the program, enacted in 1970, for services like cancer screenings, breast exams, HIV tests, and birth control. In 2016, health centers used Title X money to conduct 720,000 Pap tests, more than 4 million STD tests, and nearly 1 million breast exams, according to the Department of Health and Human Services.

The impact extends beyond Planned Parenthood to other clinics providing family services, and clinics in other states are left scrambling to make big decisions.

“Without other funding, they are looking at closing their clinics,” said De-Lin, who has been working at Planned Parenthood for six years. “That means women have to travel further for care, aren’t able to access healthcare and a lot of lifesaving cancer preventive services.”

Planned Parenthood is often the only option for women in rural areas. More than half of its clinics are in underserved or rural communities. Research shows that rural women are more likely to be poor, lack health insurance, and have less access to health care than urban women. Many of these women have to travel long distances to get care, resulting in higher rates of unplanned pregnancies, STDs, and cervical cancer. After closing Planned Parenthood health centers in Wisconsin and Texas, women were forced to drive more than 100 miles, some as far as 200 to 300 miles, to the nearest health center or go without care.

While Planned Parenthood works to protect reproductive healthcare and access to abortion, the organization has been rocked by internal turmoil. Former Planned Parenthood president and CEO Dr. Leana Wen, was ousted by the board on Tuesday over “philosophical differences.” People close to the matter told the New York Times that Planned Parenthood’s leaders felt they needed a more politically invested advocate in the abortion wars. Wen was in the position for eight months.

Despite her controversial and short tenure, Wen was vocal about Title X. “The Trump-Pence gag rule is unethical, dangerous, and illegal, and we hope the court provides necessary relief for the millions who rely on Title X health centers,” she said in a statement to the Daily Dot prior to being fired.

Beddoe, who is now an activist for reproductive healthcare, also thinks the Trump administration’s fight against abortion has gone too far.

Most Americans oppose the gag rule, according to Planned Parenthood. A recent poll by the Kaiser Family found that six in 10 Republican women support Title X and federally funded reproductive healthcare for women with low incomes.

More than 200 members of Congress, including Warren, also oppose the gag rule. The House of Representatives passed a spending package that would block the gag rule from being implemented. The Senate is expected to act next. Rep. Nita Lowey (D-N.Y.), who called the gag rule a “dangerous policy [that] cannot stand,” has been a leader in defending the right to access reproductive healthcare, no matter where you live or how much money you make.

Lowey, a vocal opponent of the administration’s Title X gag rule, vows to continue fighting. She recently tweeted that, “We cannot allow this assault on women’s health to continue,” after the latest court ruling. She thinks the domestic gag rule specifically targets Planned Parenthood.

Amid the rising tide of activism, Beddoe wants millennial women to fight to make sure Title X stays in place. “Those are cancer screenings for people like you and me,” she said. “People getting their birth control. People accessing basic healthcare. People on the margins who don’t have insurance. You mostly think you’re healthy, until you’re not.”

Anti-abortion rights activists have long argued that no organization with ties to abortion should receive federal funding. The Trump administration’s gag rule is popular among social conservatives who believe Title X funding is linked to abortion. But federal funding for abortion is not legal except in cases of rape, incest, or to save the life of the woman.

The Department of Health and Human Services has offered no real evidence of “commingling,” or that Title X money is being used to provide abortions.

“Without any evidence to back up HHS’ claims, this rule is clearly a solution in search of a problem. There has not been an [Office of Inspector General] report, a serious study nor any hard evidence of Title X funds going toward abortions,” said Michelle Kuppersmith, director of reproductive health watchdog group Equity Forward, in a statement.

Planned Parenthood’s doors are still open, for now, but its emergency funding is dwindling. And the legal fight is far from over. De-Lin says women’s lives are at risk.

“We need politicians out of the exam rooms,” De-Lin told me. “Decisions about healthcare are best made between a woman and her doctor.”

This article has been updated to clarify that Rhea Beddoe received treatment at Planned Parenthood of New York City.