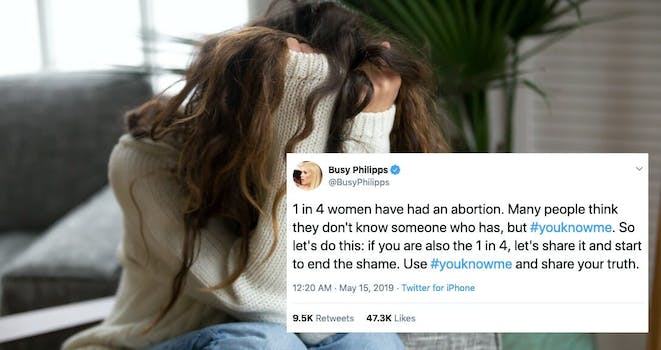 The unfortunate side effects of well-intentioned hashtags like #YouKnowMe

It's OK if you don't want to explain your choices or relive your trauma on social media.

Once again we are in the middle of a social justice hashtag blitz—an online effort to tackle an enormous and pressing issue via 280-character tweets. This time, the issue is abortion rights, which are, unfortunately as fragile as ever.

The hashtag is #youknowme. And the people who are the most vulnerable—women and trans or gender non-conforming folks with uteruses—are being asked to do the most. Not only are we being asked to explain the issue, to make it palatable, but we are being asked to unearth what could be most private and painful moments in the hopes that it will somehow persuade those who don’t give a damn about our rights to suddenly see us as worthy of the very protections that lawmakers in Georgia, Alabama, Missouri, and many more are stripping away.

Late Tuesday night, actress and talk show host Busy Philipps launched the social media campaign to raise awareness about just how common abortion is. Phillips wrote, “Many people think they don’t know someone who has, but #youknowme. So let’s do this: if you are also the 1 in 4, let’s share it and start to end the shame. Use #youknowme and share your truth.”

1 in 4 women have had an abortion. Many people think they don't know someone who has, but #youknowme. So let's do this: if you are also the 1 in 4, let's share it and start to end the shame. Use #youknowme and share your truth.

Women began sharing their stories in response, and before long there were thousands of tweets under the hashtag. In addition to those sharing their stories and experiences, many responded with support. For many, the hashtag appeared to provide an opportunity for connection and dialogue. A quick scroll through the thread reveals that many of those who spoke up felt the reduced shame that Philipps advocates for in her original tweet.

But those who followed the hashtag closely noticed that another pattern emerged. Many women couched their tweets in justifications such as being too young, being raped, or being otherwise incapable of caring for a child. The subtext was clear: The shame surrounding abortion is very much alive and well.

As actor and comedian Hannah Solow eloquently put it, “You don’t need to have a ‘reason’ to have an abortion. You shouldn’t have to prove to anyone why you want control over your own body and your own life.”

I feel proud and honored to hear people sharing their #YouKnowMe abortion stories, but let’s be clear, you don’t need to have a “reason” to have an abortion. You shouldn’t have to prove to anyone why you want control over your own body and your own life.

If we are truly in support of the idea that abortion is a choice rooted in our right to have control of our bodies, we should not have to offer our reasons or prove that it was the “right” choice. And yet, so often, many who’ve had abortions feel pressure to do so. Much like victims of rape or sexual assault who comb their own stories for errors and missteps, those who’ve had abortions (even those who were confident in their decisions) often feel they need to present context so that others will understand and respect their choices. And so, one unfortunate side effect of Philipps’s well-meaning hashtag is that many abortion-havers have spent time interrogating themselves and their choices.

Of course, this is not the intended effect of the hashtag. Like the #MeToo hashtag, at its most basic level, #youknowme is intended as a rallying cry and a signal boost. Philipps told the New York Times, “We need to be as loud as [the anti-abortion people] are, but with the truth. That’s the only thing we have. For me, it includes people standing up and saying, ‘I am that one in four.’ It doesn’t matter why, when, or how old you were.”

What Philipps fails to address is that for many, speaking out might not only be painful, but also dangerous.

When we ask women, trans, and gender-nonconforming people to share their abortion stories, we may be touching complicated and traumatic moments. We may also be asking people to put themselves at risk for retaliation or harm. When we open such dialogues, we must remember that this is something for which many people would like to see our choices criminalized. And while some of us live in liberal cities, or are surrounded by communities that offer us support, others live in close proximity to those who’d like to diminish or eliminate abortion rights. Even in places where the law allows us protections, there are those who take private action to minimize access to safe and affordable abortions.

Furthermore, while well-intentioned, the effort to show how common abortion is does very little to persuade anti-choice, “pro-lifers” to see things differently. People who want to criminalize abortion are not going to see that lots and lots of people have had abortions and say, “OK, then it should be legal.” For them, seeing how common and widespread abortion currently is may only reinforce their belief that drastic measures need to be taken to eliminate it.

And yet, this isn’t the first time we’ve been called upon to share our stories. In 2015, the #ShoutYourAbortion hashtag had a similar moment. I had already shared my own abortion story publicly a year earlier, but I remember being taken aback. “Shout your abortion?” I asked a friend. “Is that supposed to make us feel safe?”

These hashtags were both born of moments of uncertainty. In 2015, lawmakers were chipping away at Planned Parenthood, and today their efforts seem to have only doubled down. What’s clear is people feel upset and scared. Our rights are not guaranteed and these hashtags are a reaction.

But when it comes to our long-term capacity to change our system and to heal our collective suffering, the reaction may be doing more harm than good. In The Body Keeps the Score, Bessel A. van der Kolk explains how important it is to handle our trauma with care, and how easy it is to touch trauma in a way that leads to feelings of hopelessness:

Long after a traumatic experience is over, it may be reactivated at the slightest hint of danger and mobilize disturbed brain circuits and secrete massive amounts of stress hormones. This precipitates unpleasant emotions intense physical sensations, and impulsive and aggressive actions. These posttraumatic reactions feel incomprehensible and overwhelming. Feeling out of control, survivors of trauma often begin to fear that they are damaged to the core and beyond redemption.

If we’ve lived the reality of a system where our choices are shamed, where we are repeatedly told that our bodies are not our own to govern, entering an echo chamber of stories of that pain may actually do more harm than good. Especially if those stories touch our own feelings of fear and powerlessness.

Van der Kolk writes, “Traumatized people chronically feel unsafe inside their bodies: The past is alive in the form of gnawing interior discomfort. Their bodies are constantly bombarded by visceral warning signs, and, in an attempt to control these processes, they often become expert at ignoring their gut feelings and in numbing awareness of what is played out inside. They learn to hide from their selves.”

So what can we do? Van der Kolk advocates for “befriending the body.” In other words, we can listen to our bodies, be kind and offer ourselves gentle attention: “In order to change, people need to become aware of their sensations and the way that their bodies interact with the world around them. Physical self-awareness is the first step in releasing the tyranny of the past.”

It’s clear that much is at risk in this moment, and it would be naive to imagine that we can fight this fight without organizing and mobilizing. But we can only do that when we feel safe and strong. More than shouting and hashtagging, what we need most right now is to take very good care of ourselves and that starts with the bodies that lawmakers and the far right are trying so very hard to control. So, while I’m grateful to all those who are currently sharing their stories, today I’m hoping that more of us will listen to our own bodies and hearts rather than a hashtag, and decide what feels safe for ourselves.