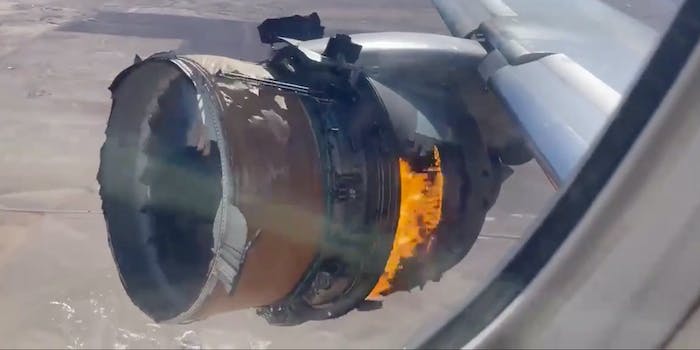 One video shows the engine rattling while it’s engulfed in flames.

Videos and photos captured a United Airlines flight flying through the sky with one of its engines on fire before the plane landed safely at a Denver airport.

The Boeing 777-200, originally headed to Honolulu, was carrying 231 passengers and 10 crew members. None were injured on the flight, nor was anyone on the ground below, authorities said.

The dramatic-looking engine failure was captured vividly on camera. Passengers shared photos and videos of what looks like a significant engine failure, with flames, damage, and smoke.

The plane dropped debris throughout several Colorado neighborhoods, including a piece that narrowly missed someone’s home. One video shows the engine rattling while it’s engulfed in flames.

Another video from a driver’s dashboard camera shows the moment the engine exploded in the sky, leaving behind a cloud of black smoke.

Once the plane landed, more photos captured charred remains of the engine. Passengers were heard cheering and clapping as the plane touched down.

In a statement, the Federal Aviation Administration said that the flight experienced a right engine failure after takeoff. Both the FAA and the National Transportation Safety Board are investigating the incident.