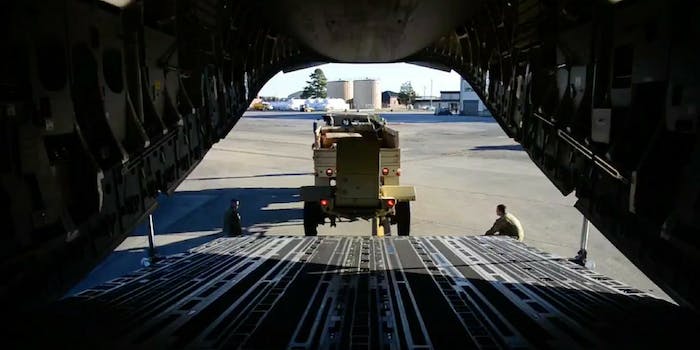 Trump is sending more than 5,000 troops to the border, in what many call a political stunt

The migrant caravan won't even reach the U.S. for another 2 months.

President Donald Trump has already started deploying 5,200 troops to the U.S.-Mexico border in a “show of force” against the 3,500-person migrant caravan currently traveling through Mexico, according to the New York Times. However, many are calling out Trump’s “Operation Faithful Patriot” as a xenophobic stunt to rally his far-right base before the midterms.

The deployment is especially silly, considering it has launched months before the caravan will even reach the border. The caravan may shrink more as it makes its way north, as it already has from its original count of 7,000. Additionally, it’s legal to seek asylum in the U.S. at a port of entry, and still within a person’s legal right to seek asylum even if they come into the U.S. unauthorized.

On Twitter, Washington Examiner senior editor Dave Brown shared footage of a C-17 aircraft leaving for Fort Knox as part of the mission, as well as photos of soldiers loading the aircraft.

As of Monday, 800 troops had arrived at the border, with 200 planned for Tuesday and 1,700 by Saturday, according to Fox News’ Jennifer Griffin. While the military is already preparing for the operation, the critics of Trump’s plan are calling it a bid for political points from his anti-immigrant base one week before the midterm election.

Trump is sending 5200 troops to the border. THIS IS ALL THEATER

The caravan is 1,000 miles + from the U.S. border, has fewer than 5000 people and is traveling about 20 miles per day pic.twitter.com/biyqcI2kvy

Media – the "caravan" will have to cover more than 100 miles PER DAY to get to the border by midterms. Why are taxpayers paying for this obvious charade? It is imperative you cover it for what it is, not parrot and amplify Trump's storyline.

Press coverage too often accepts Trump's line on the caravan, despite its hyperbole and falsehoods.

Trump is sending 5200 troops to the border. Totally made up threat. This is a vast misuse of government funds.

Then why the heck do you need 5000 troops at the border if you truly believe it’s lawful to seek asylum. https://t.co/AffgL1Fp8l

Please consider the possibility that Trump is sending 5000 troops down now, weeks before the group could reach the border, because Trump is counting on his troops to intimidate South Texas voters into skipping the election. https://t.co/Ddh7IbYLS2

Just spoke with former @CBP Commissioner Gil Kerlikowske, who handled 68,000 unaccompanied children in the summer of '14. He says Trump's actions today, just before midterms, is "a misuse of active duty military…To say this isn't a political stunt is misleading the public."

“This is using the troops as props,” Jason Dempsey, a former Army infantry officer in Iraq and Afghanistan now an adjunct senior fellow at the Center for a New American Security, told the Times. “We’re using a bunch of people to waste their time while they backstop the Border Patrol.”

According to Vox, there isn’t much that active duty military would be able to do at the border besides support CBP, even if the caravan were arriving this week and weren’t 1,000 miles away. The military is sending night vision-capable helicopter companies, airplanes to transport Border Patrol agents, medical units, and 22 miles of fencing reinforcement.

U.S. law, however, prevents the military from “using its capabilities directly to enforce U.S. domestic laws” without Congress’ authorization. Therefore, they won’t be able to directly arrest, detain, or deport people themselves.