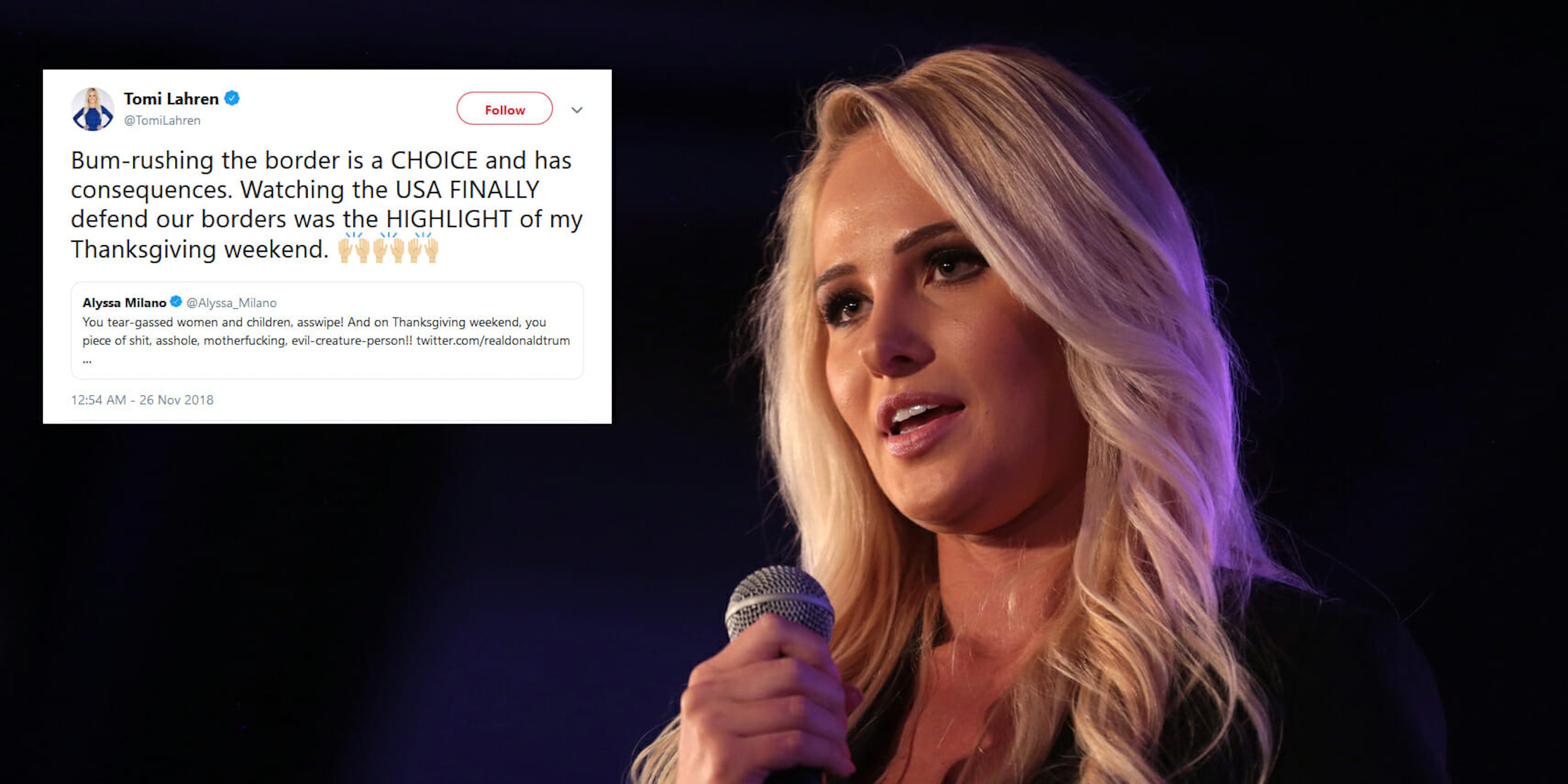 That is an odd thing to be the highlight of Thanksgiving.

Fox News pundit Tomi Lahren apparently had a very shitty Thanksgiving because, according to her, watching the United States “defend our borders” was the best part of it.

Lahren made the remarks on Twitter after United States Border Patrol agents reportedly fired tear gas at migrants at the U.S.-Mexico border on Sunday. CNN reported that around 500 migrants tried to cross the border before tear gas was used to disperse them. While a large number of people approached the border peacefully, some threw rocks and bottles, according to the Washington Post, resulting in the closure of the port of entry in San Ysidro, California.

The Fox News host seemed to really enjoy the situation, because she quote-tweeted actress Alyssa Milano, who was criticizing President Donald Trump about the behavior of U.S. Border Patrol.

Milano, in response to Trump, said the US “tear-gassed women and children… on Thanksgiving weekend.”

That seemed to spark Lahren, who proclaimed that the situation at the border was the highlight of her Thanksgiving weekend. Lahren wasn’t the only one who was enthusiastic about the crisis, but her response was perhaps the most vociferous.

“Bum-rushing the border is a CHOICE and has consequences. Watching the USA FINALLY defend our borders was the HIGHLIGHT of my Thanksgiving weekend,” she wrote, adding a number of emojis.

The tweet from the Fox News host didn’t sit well with people online, with many pointing out that the crisis at the border was an odd choice to be the ‘highlight’ of anyone’s Thanksgiving.

The highlight of my weekend was being able to spend time with my family. If you're Tamale Lasagna, it's watching children get gassed. #WTF https://t.co/snHWWuudYz

That was the highlight of your weekend? You need to get out more. https://t.co/KzCMTCGGOd

I'm sorry but if that was your highlight of Thanksgiving you are a sad and misguided human being. https://t.co/bPPO3xU2nu

This isn’t the first time Lahren has made some ill-fated Thanksgiving-related tweets. Last year, she posted a crude photoshop of former NFL quarterback Colin Kaepernick kneeling while U.S. troops stormed the beach on D-Day.