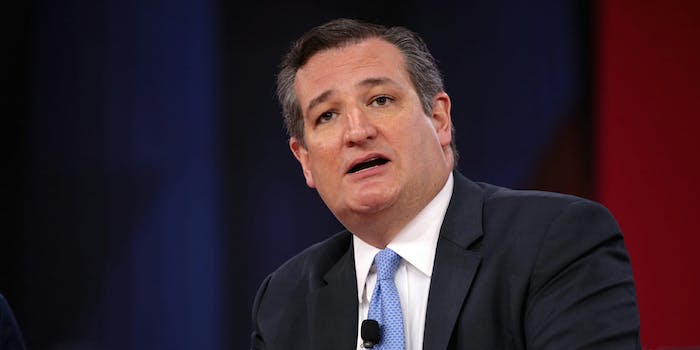 He said there was 'no point in revisiting the campaign itself.'

Sen. Ted Cruz (R-Tx.) appears to be backing off a claim he made during his election fight with Beto O’Rourke: That O’Rourke’s campaign helped to fund a migrant caravan heading toward the country’s border.

Cruz made the claim in the run-up to last week’s midterm election, even tweeting about it and telling reporters to ask O’Rourke’s campaign if it used “campaign dollars illegally” to fund the caravan.

“Two basic Qs every reporter should ask Beto today: (1) should the ‘caravan’ be allowed to cross illegally into Texas? (Beto refuses to answer.) And (2) did your campaign dollars illegally fund their doing so?” the senator wrote on Nov. 2.

However, as HuffPost points out, now that the election is over and Cruz was re-elected, despite a strong showing by O’Rourke, it appears the Texas senator no longer wants to talk about it.

“I’m happy to talk about policy, but there’s no point in revisiting the campaign itself,” he told the news outlet, later adding: “As I said, the election is over.”

The comments from Cruz came after a video was released by James O’Keefe that showed O’Rourke staffers talking about buying “baby wipes, diapers, water, fruit and granola bars” for asylum-seekers who were already in Texas.

Much like Cruz, President Donald Trump also spoke about the migrant caravan quite a bit ahead of the midterms, but has cooled off about it after the election, where Democrats were able to get enough votes to take control of the House of Representatives starting early next year.