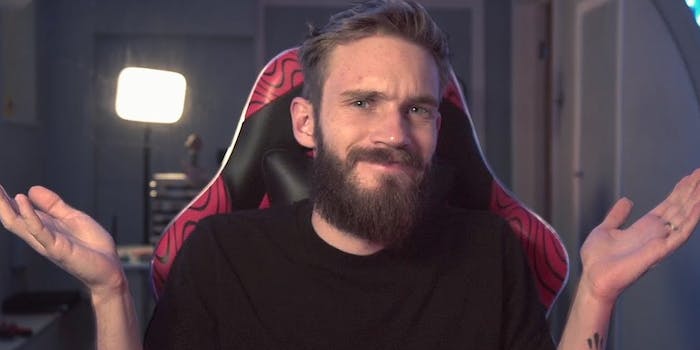 Fans say his channel is being hidden on the platform.

Google told the Daily Dot in a statement on Thursday that it is “hearing reports that PewDiePie’s channel and some videos are not surfacing within searches. We are currently working on fixing the issue. We are sorry for any inconvenience this has caused.”

Supporters of the YouTuber began reporting across social media that Kjellberg’s videos no longer showed up in the results after searching for “PewDiePie” on the platform.

“Pewdiepie may have been shadowbanned by YouTube,” @defnoodles said. “His channel no longer appears in search, and only 1 of his videos appears in the top results. His latest video got 34k views, 1k comments, 4.8 likes in 1 hour.”

Other users noted that notifications from Kjellberg, whose channel boasts an astonishing 107 million subscribers, did not appear on Thursday after his most recent video was uploaded.

“His subs also didn’t receive a notification about his video from today,” @linzasaur added. “Some are saying it’s a shadowban, but it’s not clear what the suppression could be about.

The Daily Dot tested out the numerous claims by searching for the term “PewDiePie” on YouTube and discovered that Kjellberg’s channel was not presented as a result.

The top 3 results, although related to PewDiePie, were not from his channel. The fourth result was in fact a video produced by PewDiePie but from more than 1 year ago.

PewDiePie’s latest video did not appear under the subscriptions tab while using an account subscribed to Kjellberg’s channel either.

A second search for “PewDiePie” shortly after did show Kjellberg’s channel as the top result, although the videos listed below it remained the same. Users on Twitter appeared to notice the change as well.

“Thanks for tagging us – we’re looking into it and we’ll update you once we know more,” @TeamYouTube said.

When asked why PewDiePie wasn’t initially showing up in searches, however, TeamYouTube seemed to suggest that it did not see an issue.

“Appreciate the tag – search on YouTube strives to surface the most relevant results and videos are ranked based on a variety of factors,” @TeamYouTube said before offering instructions on how to use the platform’s “advanced filters.”

It remains unclear whether the issue is one related to a purposeful change by YouTube or merely a mistake.