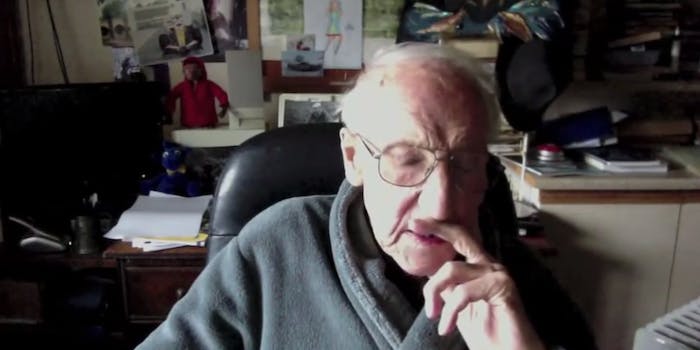 For a short time he had the most popular channel on YouTube.

Peter Oakley, who was affectionately called the “Internet Grandad” by his fans, has died after a battle with cancer. He was 86.

At one point Oakley owned the most-subscribed channel on YouTube, where the pensioner from England was better known as geriatric1927.

He made his first video in 2006. As someone who got sucked into YouTube at a later age (although early in YouTube’s life), he said he just wanted to “bitch and grumble about life in general” and hoped that people would watch and respond. That first post at nearly 3 million views remains his most popular.

He kept true to his word and entertained his subscribers with videos about his life, which included military service and his time as a member of the British rock band The Zimmers. For one month in 2006, his was the most popular channel on YouTube. For many, it was a welcome departure from the youthfulness present in much of the YouTube community. And for his part, he enjoyed “every minute” of his 15 minutes of fame.

Oakley put out his final video on Feb. 12.

“In conclusion, I would say my possibly final goodbye,” he said. “So goodbye.”

“Peter has just been transferred to a nursing care facility, he has cancer which is apparently too far advanced for treatment and he is not expected to pull through,” it read.

It was also on Oakley’s blog where his death was announced on Mar. 23. According to the post, he “was in no pain” when he died.

Condolences have been pouring in from the YouTube community, where many have been watching Oakley since the beginning.

“I remember the day that I subscribed to you,” shaycarl wrote on Oakley’s final video. “I felt that YouTube was truly something that I’d never seen before because it was a window into the lives of people I never imagined I would meet. It made me feel like the world was a lot smaller and I wanted to be a part of this thing that allowed me to experience life through stories I would never live. We will remember your stories.”

Peter Oakley (Geriatric1927) died this week. Pretty amazing that in the early days one of the most popular YouTubers was 80 years old.

Oakley is no longer here, but his videos will live on.