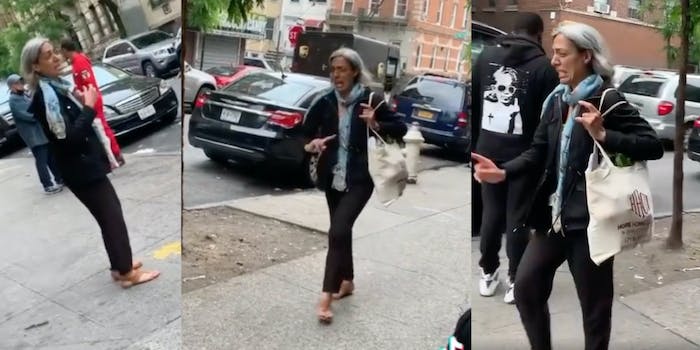 She's known for falsely accusing two Black women of threatening to kill her after she suspected them of stealing their own phone charger.

It’s a bad time to be a Karen.

Over the last several years, any tolerance that society had built up for Karens—or people who behave in decidedly racist or entitled ways—has completely disappeared. Instead, people have started to confront those acting in Karen-ish ways, calling them out for their behavior and, in some cases, publicly shaming them for their past deeds.

A Karen that went viral toward the beginning of May is on the receiving end of some of this shame after she called the police on two Black women. The viral incident, which the Daily Dot reported on at the time, saw the Karen accusing the women of threatening to “beat” her after she refused to return a dropped charger. The incident ultimately escalated, with Karen calling the police, accusing the women of “threatening” her, and admitting to being racist.

That same Karen was recently recognized on a walk through New York and found herself on the receiving end of judgment over her past actions. A viral video, which has earned hundreds of upvotes in just a few hours on Reddit, sees several New Yorkers gleefully shaming Karen.

The brief upload begins as the woman approaches the camera. She appears to be speaking another language, which commenters claim is Farsi, as she loudly and tearfully complains about something. As she passes the camera, she appears to switch to English, proclaiming that “I am not Black.”

This prompts a nearby bystander to call her “racist,” to which Karen immediately responds in the affirmative. “I am racist,” she says, voice frenzied, before saying what sounds like “I am not Hispanic.” She then turns to continue walking away, before the person filming steps out and, referencing her early May call to police, tells Karen “you dropped your charger.”

Commenters on the Reddit post were markedly unsympathetic toward Karen. They criticized her attempts to “play the victim,” and delighted in the thoroughly deserved comeuppance.

While most viewers were relishing in the karma, however, some expressed sympathy for Karen. One commenter noted the “hell” she is likely going through right now. They pointed out that she is likely getting “berated randomly all day, by compete strangers no less” over the early May video.

“Her life is probably falling apart,” they wrote.

Viewers are generally unconcerned with Karen’s state of mind, however; too focused on the harm she’s done to feel any sympathy for a situation she got herself into. As noted by several commenters, “(Whose) fault is that?”