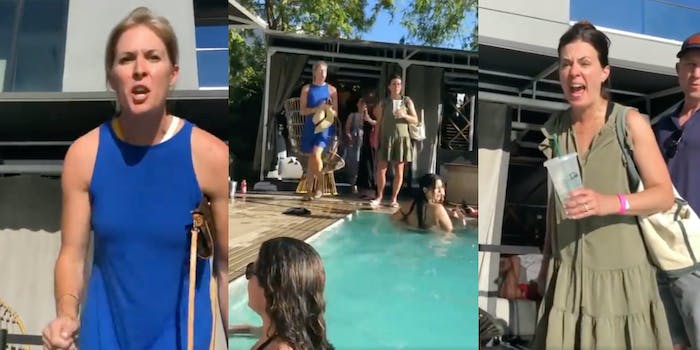 'We gave her the Cersei Lannister treatment.'

A group of Karens got the “Cersei Lannister treatment” after they allegedly complained about a Black lesbian couple at a hotel pool in Sacramento.

The group allegedly became irate after witnessing the two women kiss, citing the presence of children at the hotel pool area.

A video captured how the crowd of bystanders reacted to the women’s alleged homophobia. In the video, the women can be seen exiting the pool area, a few at a time. As each woman passes by, some people in the pool can be heard chanting “shame” at them.

“This woman asked a female couple to stop kissing in a public pool because her kids were present. So we gave her the Cersei Lannister treatment while they were escorted out by security. SHAME!!” an Instagram user who filmed and posted the video, Art Kaligos, said, referring to Cersei Lannister’s infamous walk of Shame in the fifth season of Game of Thrones.

Some of the women in the group appear embarrassed as they scurry out of the pool area, and others, like one who gives the camera her finger, appear ready for a verbal confrontation. One of the women stops to argue with the crowd, singling out members by calling them “fucking loser(s)” and “fucking asshole(s)”—in front of children.

Kaligos told the Daily Dot that the incident took place at the Kimpton Sawyer Hotel in Sacramento on Sunday.

He said the queer women were “singled out” by the group and that the mothers in the group “called security on them for showing affection.”

In a statement sent to the Daily Dot, Kaligos’ friend Georgy Avakov, who interacted with the women in the video, said that the group was asked by security to apologize to the couple but refused.

Avakov said that “at least a dozen” straight, non-Black couples were also in the pool area and showing PDA but that the women had no problem with those couples.

Domonique Veasley, one of the women who the group allegedly complained about believes they are homophobic, telling CBS13 that she doesn’t think the women would’ve singled her out if she were straight. She said that some of the women in the group asked them to stop kissing because their children were present and believes they later called security on her.

“My initial reaction for the children was ‘Oh yeah, and then I was like ‘You are asking me to stop being me,” Veasley told the outlet. “This is not okay anymore, it’s 2021.”

Avakov said that “it is impossible not to be inspired by (Veasley’s) courage” and “disturbed by the unprovoked harassment she faced.”

Update 4:35pm CT, June 3: When reached for comment, Nikki Carlson, general manager at the Sawyer, told the Daily Dot in a statement that the hotel “does not condone discrimination or verbal assault of any kind.”

“An unfortunate disagreement between guests occurred at our pool over the holiday weekend and the matter has since been resolved,” the statement continued.