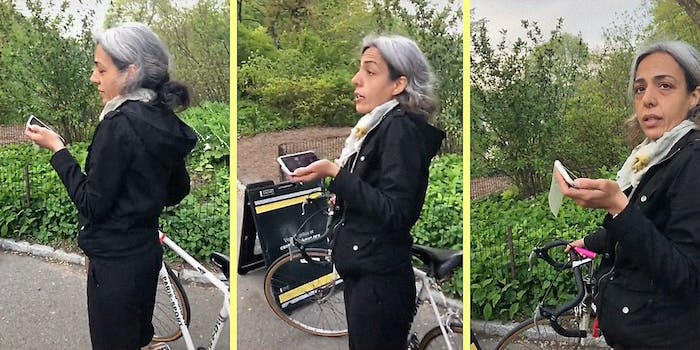 In the video, the woman tells a 911 operator the women are attempting to 'beat' her.

In a viral TikTok video, a “Karen” in Central Park accuses two Black women of threatening to kill her after they asked her to hand them back a phone changer they dropped during a bike ride.

Posted by Alana Lambert (@alanalambert) to TikTok on Wednesday, the video shows what was supposed to be a start of a relaxing bike ride around Central Park in New York City for the pair.

The video labeled “Part 2,” which is actually the first video chronologically, recounts how the charger was dropped. The text overlay reads: “I brought my portable charger & it slipped off my friend’s bike. This lady lunges for the charger and claims we will have to provide proof to get this charger back.”

The woman, whom the TikToker refers to as “NYC Karen,” walks toward a random man and tells him, “They are threatening me, and they are going to kill me.”

In the second video—the video that went especially viral across social media on Thursday—Lambert gives a rundown of the incident. The woman is apparently on the phone with 911, telling an operator that the women are attempting to “beat” her. She even fakes a reaction of someone being accosted, telling the operator, “They’re already touching me!” The two women are not touching the woman in the video.

“I’m not saying I’m not going to give it to you; you have to prove that it’s yours,” she tells the women.

Lambert then asks the woman, pointblank, “Are you racist or something?”

The woman pulls no punches, saying in response, “Yes, I am. I pick my race over any race. What’s your problem?”

In part 4, they continue their attempt to get the charger back from the woman.

In part 5, both parties attempt to provide their stories to horse-mounted New York City police.

In part 6, Lambert explains that they did receive her charger back. However, in the text overlay of the video, she revealed that one of the officers believed the charger belonged to Lambert but said that he is “going to wait until (the woman) calms down” and walks away before giving it back to her.

“Enabling?” the TikToker questioned in the video’s caption.

The video series is reminiscent of when Amy Cooper, the original Central Park Karen, falsely accused a Black bird watcher of threatening her. Following the incident with Cooper, New York Gov. Andrew Cuomo signed legislation that would make it illegal to make false race-based calls to 911, according to Deadline.

The Daily Dot has reached out to the New York Police Department.