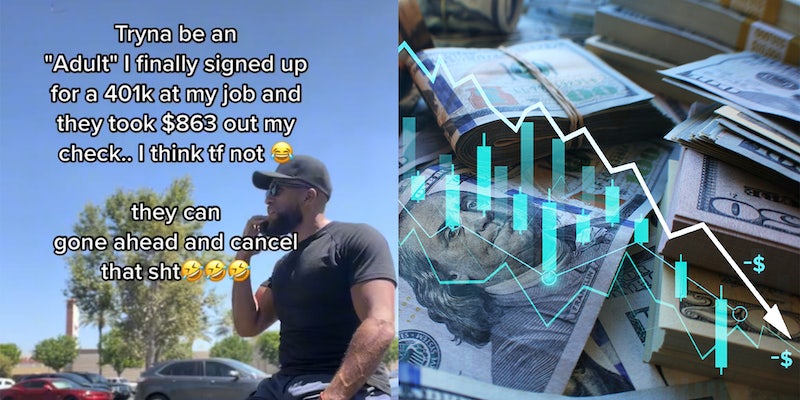 'The dollar about to collapse and take everybody retirement out with it anyway.'

A worker and TikToker has sparked a debate after posting a video saying that he regrets contributing to his 401(k). While the video appears to be a joke, the discussion it sparked is real, with users from across the site offering their thoughts on the issue under @ikeemlateethomas’s TikTok.

The video currently has over 1.1 million views.

“They can gone ahead and cancel that sht,” the text concludes.

For context, a 401(k) is a company-sponsored retirement account. An employee can offer to contribute a portion of their paycheck to this account to save for retirement, and an employer may match these contributions. Generally, contributions to a 401(k) are made from gross, pre-tax income, meaning that an employee’s taxable income is lowered.

Still, with the current state of the world and inflation on the rise, commenters say it can feel difficult to justify the contribution.

“The dollar about to collapse and take everybody retirement out with it anyway,” another added.

However, many were simply concerned by the amount of money they would have to contribute in the present, the future notwithstanding.

“At my first ‘Real’ job now. Signed up for 8%, seen what they took and switched it right back,” a commenter wrote. “I’m not grown enough.”

“You ain’t never lied!” a second user stated. “My rent came out. I was like hold on a damn minute.”

“No seriously though,” a third echoed. “felt like I took a whole new job.”

In response to comments like these, other users chimed in to recommend that these employees reduce their contribution, but continue contributing.

“Some people really don’t understand the tax benefits and long term benefits of a 401K. contribute what you can but don’t go overboard,” a commenter suggested.

“Contribute about 6% to get started. But contribute,” a further user offered. “Over time, you can’t beat the money you’ll make.”

As one user wrote, “The earlier you invest the better.”