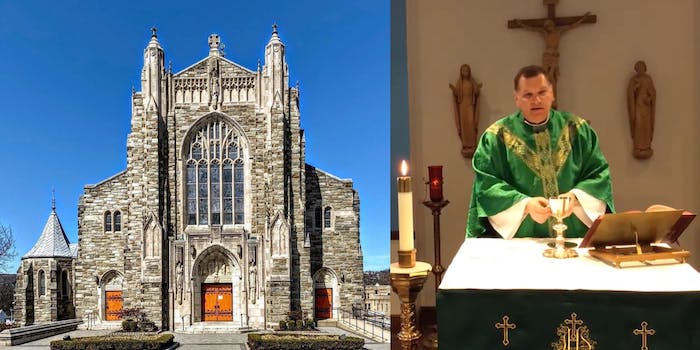 The pastor said the movement's 'agenda' is 'very controversial.'

A New Jersey pastor is facing pushback after sending a letter requesting that one of his church-goers refrain from wearing Black Lives Matter shirts to services.

Tom Morris has attended Our Lady of Sorrows in South Orange, New Jersey, since 1981. In recent weeks, he’s worn various T-shirts supporting Black Lives Matter, but apparently some fellow church-goers found that to be offensive.

“I write to let you know that several people have complained to me after seeing your t-shirt with the Black Lives Matter slogan,” reads a letter from Fr. Brian Needles. “I obviously have neither the power nor the desire to dictate what clothing a person wears to church. On the other hand, I don’t wish to see a t-shirt become a source of division among my parishioners.”

Needles went on to say that “nobody in their right mind” would disagree with the idea that Black lives matter, but that the organization’s “agenda” is “very controversial.”

Part of the issue, according to Needles, is that Morris was wearing the shirt while he was reading from the Bible in front of the congregation, something Morris says he has done many times over the decades he has been a member of the church.

The letter continued: “I therefore respectfully request that you, in a spirit of good will, refrain from wearing that t-shirt or any other t-shirt with an overtly political slogan on it when lectoring. We live in such a contentious society already and I don’t want a t-shirt worm at Mass to become a source of distraction or bad feelings in our parish.”

The Archdiocese of Newark supported the pastor’s position and plans to ask all pastors to remind the congregation that lectors have to follow a dress code prohibiting T-shirts of any kind.

“The policy requires celebrants and lay ministers to refrain from wearing t-shirts as well as any clothing that draws attention to the individual and distracts from the Word of God,” read a statement from the archdiocese. “This is to ensure that the assembly’s attention is focused on Scripture and not on the individual proclaiming it.”

But Morris doesn’t believe sporting a shirt calling for equality detracts from the words of the Bible, and he doesn’t plan on backing down.

“It’s not about me. I want to call attention to the teachings of Jesus — how we are supposed to treat each other,” he said. “I won’t stop. I’m committed. I will not back down.”

He also expressed concern that complaints from members of the congregation, along with the pastor’s preference to keep politics out of the church, suggested people at Our Lady of Sorrow aren’t “into the social justice aspect of the teachings of Jesus.”