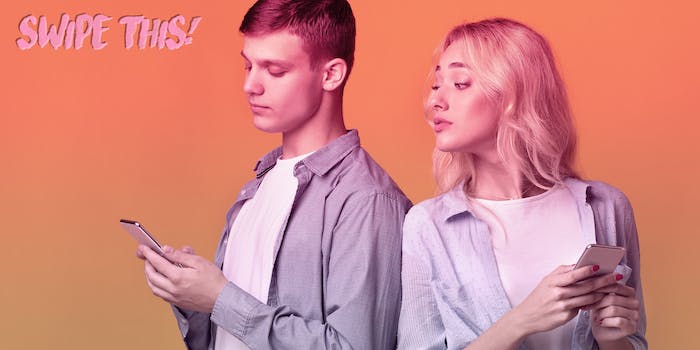 Swipe This! Why hasn’t my boyfriend made a Black Lives Matter post?

I have told my boyfriend twice that it makes me uncomfortable that he hasn’t yet made a permanent post on his Instagram about Black Lives Matter on Instagram. Both times he got very upset. He said I was putting so much importance on it and that it minimized his other efforts like protesting. We’ve gone to several protests together, and I agree that protesting is important. But why hasn’t he done this one simple thing to show the people who follow him that he’s an ally?

I told him I think it’s his white fragility that’s keeping him from posting (we’re both white). He says he’s posting every day to his stories and reading and learning and protesting almost every day. He told me he’s having difficult conversations with his family. He also said he realizes that he haws white fragility, but he doesn’t like me “guilt-tripping” him.

But isn’t the point of this movement to hold each other accountable? If he saw me not being actively anti-racist, I would certainly want him to call me out. I want him to call his friends out. I’ve checked their pages, and so many of them aren’t posting.

This is the first time my boyfriend and I have had a major conflict around something political. We share beliefs and values. Even though we were raised in conservative, small towns, we’re both very liberal. He’s anti-Trump, and he is usually open to conversations about feminism and what women have been through. I’m just angry that he doesn’t see how important it is to speak out right now. I think silence is really dangerous, and it scares me that he doesn’t want to be more vocal on his main page where lots of people can see his beliefs. He is a white male living in an extremely racist country—and I think it’s time for him to speak up!

I should also mention that my boyfriend is a photographer with a substantial following, so it’s not like this post would just go out to a few hundred acquaintances. He has several thousand followers, many of whom look up to him, and I can’t help but wonder if they’re noticing his silence, too. He has a platform. I want him to use it!

Why won’t he do this extremely small thing that could speak volumes to so many people?

Saying No to Silence

Dear Saying No to Silence,

I agree with you. We cannot be silent.

We—especially white people, and those of us who benefit from white privilege—have to be vocally and actively anti-racist. We have to demand justice. And not just for another month or another year. We will have to do it for a lifetime.

If you look at the history of racism in our country, this work is long overdue. But change will not come overnight.

So why are you fixating on an Instagram post? Do you really believe this is what will create a more just world? Or are you simply focused—as white people so often are—on your own discomfort?

Maybe you think of the main Instagram page as a profile, so making a statement there would be a way for your boyfriend to pledge his commitment to this movement. Or maybe you want to be able to identify him as “one of the good guys.” Perhaps, since you’re snooping around on his friends’ pages to see what they’re up to, you’re afraid that people see him as a representation of you, and you can’t bear the thought of being seen as an imperfect ally by association. Maybe your boyfriend shares your fear of imperfection, and that’s exactly why he hasn’t posted. Maybe he’s afraid of getting it wrong. Maybe he’s unsure of what he wants to say or share.

Or maybe, as a privileged and protected white dude living in America, he understands that right now, he needs to listen before he speaks.

Trust me when I say that no matter how many posts you or your boyfriend make, you will still be wildly imperfect. And that’s OK. This moment is not about striving for perfection. It’s not about you getting a gold star for being an ideal ally. It’s about committing to the lifelong work of showing up.

It seems to me you have started this work. But what happens when this moment passes? How often will you donate your time, money, and energy to the cause? And for how long? Will you bring the same passion to anti-racism that you’ve brought to your boyfriend’s Instagram presence?

You wrote, “Isn’t the point of this movement to hold each other accountable?”

That is such a small fraction of the point.

I commend you for having an uncomfortable conversation with someone you love, but I think you need to take closer look at your own discomfort. By blaming your boyfriend for not doing enough, do you get to avoid inspecting your own choices and your own shortcomings as an ally?

Instead of investing in petty quarrels with your boyfriend, consider more constructive ways to use your energy. Talk to him about the materials he’s reading. What is he learning? What does he want to do differently? What does he want to share? And more importantly, what about your learning, your choices, and your ability to share your own growth?

If you are looking for resources, I’d suggest starting with Ibram X. Kendi’s How to Be an Anti-Racist. If you’re involved in community work, or want to be, read Mariame Kaba and Shira Hassan’s Fumbling Towards Repair. If you’d like to learn more about the history of mass incarceration, check out Naomi Murakawa’s The First Civil Right: How Liberals Built the US Prison System. If you’d like to learn about abolishing the police, read Alex S. Vitale’s The End of Policing (the e-book is now only $3!). And if you’d like to patronize some Black-owned book stores, check out Subway Book Review‘s map and spreadsheet.

I myself am certainly not a perfect ally. I cannot offer you a roadmap for this revolution. I cannot tell you how long the journey will be, or what other obstacles we’ll face along the way. But I can tell you this: If you’re in it to win it, you need to check your ego at the door.

Social media is an incredible tool for connecting and sharing vital information. I hope you will keep posting and keep sharing. But if you’re looking to create a shrine to your own goodness, you’re doing it all wrong. Give yourself permission to be imperfect. Let your imperfection fuel you to keep learning, to keep fighting, and to keep striving for better.