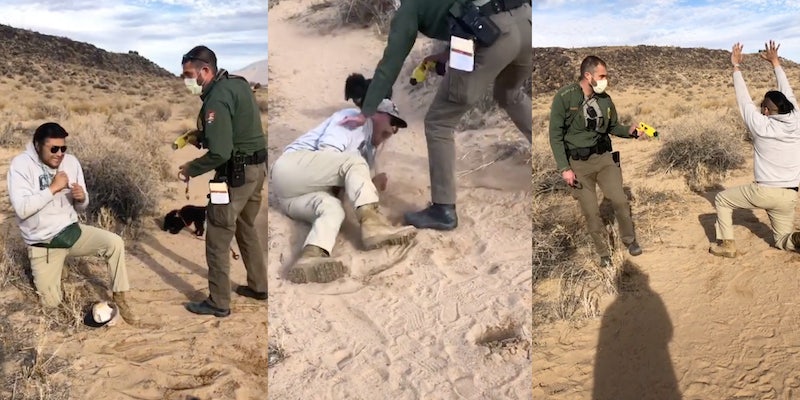 He was visiting the Petroglyphs to pray.

Video of a park ranger repeatedly tasing an indigenous man out walking through a national park in New Mexico is reigniting frustrations regarding the treatment of Native Americans in the United States.

Darrell House, who says he is Navajo and Oneida as well as a former marine, was visiting the Petroglyph National Monument to pray with his dog and his sister when the trouble began. According to KRQE, House went off-trail to avoid a large group of people ahead of him and was confronted by a park ranger who told him to return to the path.

Once he did as asked, the ranger demanded ID, but House said he didn’t want to provide any, and the ranger reportedly responded by tasing him.

“I was holding my dog, so my dog got tased as well, he felt the shock, he felt everything,” House told KRQE. “I ended up dropping him when I fell.”

Horrifying footage captured by House’s sister shows him screaming as the ranger repeatedly tases him. At no point during the nearly 5-minute video does House do anything that would suggest he’s a threat to the ranger or anyone else in the vicinity.

The ranger repeatedly demands House show him his hands, even when his hands are clearly held up and out in front of him to show that he isn’t holding anything that might be used as a weapon. He then tries to arrest House, who resists, and roughly yanks his small dog away from him.

“Why am I being arrested?” House asks.

“You’re not being arrested, you’re being detained because you refused to identify yourself,” says the ranger, again pointing a taser at him in between trying to slap handcuffs on him.

A second ranger arrives on the scene and finally handcuffs House as the first ranger continues to point his taser at him.

Everyone involved is clearly on the trail during the entire recorded encounter.

“He wanted to show power, dominance, keep me in order,” House said of the ranger, who he believes escalated things far beyond what was necessary to maintain order. “That’s what authority figures are trained to do, to keep people like me in order. To make the ‘Indian’ look crazy, to make them look insane.”

House was ultimately given three citations related to the incident, including one for going off the trail initially. Despite complying with the ranger’s request to return to the trail at the time, and apologizing for going off-trail in the video, he says he still believes he has every right to go off-trail at the Petroglyphs.

“If anyone has the right to be off trail and [wander] this land, it’s the NATIVE INDIGENOUS COMMUNITY,” he wrote alongside the video.

While some internet commenters insisted House should have immediately shown ID and not resisted being handcuffed for briefly going off-trail, many focused on the potential abuse of power at play here.

After numerous complaints, the National Park Service has said “the incident is under review and has been referred to our internal affairs unit for a thorough investigation.”