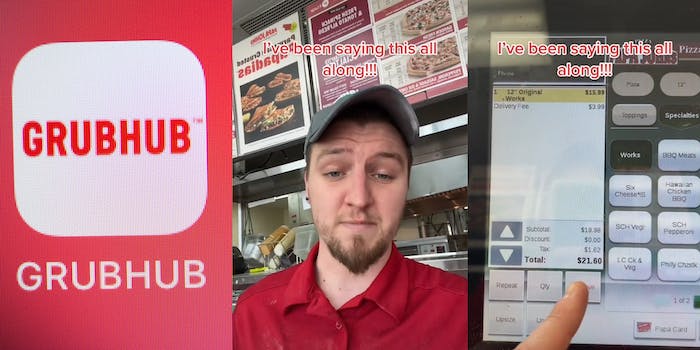 'It was a medium works, nothing special, no drinks, no sides. Check out the total.'

A TikToker’s video showing the difference between ordering a pizza through a delivery service like GrubHub or DoorDash compared to ordering directly from the shop has earned viral attention with 59,700 views on the platform. It’s also caused users to explain why they order via these apps instead of calling the pizza chain directly.

In the video, @_professorpizza_, a TikToker who makes content about working at Papa John’s, shows his viewers why these order delivery apps might not always be the most affordable way to have something delivered.

“I made a video a while back about why you shouldn’t use GrubHub, Uber(Eats) or DoorDash, especially during the day or late at night, but this is a great example of why you shouldn’t,” he says in the video. “I had an order come through from GrubHub, it was a medium works, nothing special, no drinks, no sides. Check out the total. $28.64 for one medium works pizza.”

He then shows that after taxes and delivery fees, the pizza costs $21.60, $7 less than ordering the pizza from GrubHub: “I don’t know what GrubHub did with those other $7, but you could have saved yourself $7 my guy, if you had ordered it from me. That’s before the tip. I doubt this guy left a $7 tip for the GrubHub driver.”

Why would someone order GrubHub in this scenario? Some commenters expressed that it and other services like DoorDash helped to fill the gap between their home and the edge of the nearest Papa John’s delivery area, or reduced the amount of time they had to wait for their delivery.

“I deliver DoorDash (GrubHub) and Uber eats,” one commenter wrote. “I’ve had customers tell me that delivery times are super high on Friday. We deliver it faster sometimes.”

“Papa John’s don’t deliver to my area, so if I really wanted it I would have to go through a delivery service,” another commenter wrote.

“They have larger delivery area. I always get told, ‘We don’t deliver that far,'” a commenter wrote. “DoorDash does though.”

@_professorpizza_ replied to a commenter saying that his store previously utilized DoorDash to fill in when there weren’t enough drivers available.

“I used to use doordash frequently because I didn’t have enough drivers for the amount of orders.” he wrote. “But now I haven’t used it in months because it costs me too much money and takes away from my drivers. I just up my times so everybody knows!”

The Daily Dot has reached out to @_professorpizza_ via a comment left on the video, as well as to GrubHub and Papa John’s directly via email.